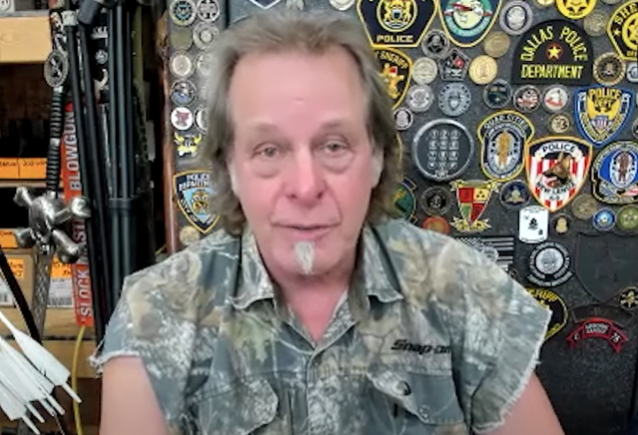 TED NUGENT Weighs In On America's Obesity Epidemic: 'Hey, America, What The Hell Are You Eating?'

Ted Nugent has weighed in on the prevalence of U.S. obesity, a chronic disease affecting more than 40% of the country's population with medical costs nearing $175 billion.

The outspoken conservative rocker, who turned 73 last December, made his comments in response to former U.S. secretary of defense Mark Esper's warning about the U.S. military's dismal recruitment numbers. Esper wrote in an op-ed for Fox News that only a small fraction of the U.S. is fit to serve anymore since many are either overweight, on drugs or have a criminal past.

Nugent addressed America's obesity epidemic during the latest edition of "The Nightly Nuge", a news-style clip in which he offers his take on the news of our world. Asked by co-host Keith Mark about Esper's comments, Ted said in part (as transcribed by BLABBERMOUTH.NET): "Hey, America, what the hell are you eating? I've never seen so much blubber on the streets of this country since I was in the Prince Of Wales Island watching pods of whales surface. And if that's offensive to some people, I'll tell you what's offensive to God: you destroying your sacred temple with toxic non-food with ingredients which you can't pronounce in portions that would sink the Bismarck.

"How braindead, how soulless does a human being have to be to put drugs, alcohol and tobacco into your sacred temple?" Ted continued. "And if that's offensive to some people, you're offensive, because that's insane behavior, it's insane misbehavior, and you're costing the rest of us a whole bunch of tax dollars to cover your fat, unhealthy, uncaring, selfish ass. So those are the people that can't qualify to fight for this country, because they'd rather grow blubber than to protect freedom. And if that's offensive to some people, tough shit. Wake up and treat your gift from God with a little respect for a change.

"We need to be a nation of warriors, and right now we're not. And that's shameful."

In his op-ed, Esper wrote: "The U.S. military's all-volunteer force (AVF) is slowly dying. The armed services are struggling to meet their recruiting goals like rarely before.

"The fact is the pool of Americans aged 17-24 who are qualified and interested in serving continues to shrink," he said. In 2018, only 29 percent of young people met the military's entry requirements, the other 71 percent being likely ineligible due mostly to "obesity, drug use, physical and mental health problems, and criminal misconduct," Esper wrote. Today, that number is only 23 percent, one-tenth of whom do not meet academic standards for service.

Two months ago, Ted once again shot down the claim that he dodged the Vietnam draft by vomiting and defecating on himself and failing the physical exam. The legendary rocker said in a 1977 High Times magazine article that he faked symptoms (being unhygienic to appear mentally unfit) and used meth before his military physical to get out of serving. But in a 2006 interview with the U.K. Independent newspaper, he said he made up that story to the High Times reporter.

The musician brought up the accusation of draft dodging during a YouTube livestream on July 31. Addressing one of the points most frequently raised by his critics, Ted said: "They claim I dodged the draft. I didn't dodge the draft. I was Bruce Lee. [They say] 'Well, he got a 4-F' [one of the classifications used by the Selective Service to designate someone who is unfit for military service]. I got a 1-Y [referring to registrants qualified for service only in time of war or national emergency]. I was eligible for the draft. I was in the Oakland Community College as a student for those two years, and I got a 1-Y, which means, I guess, they wouldn't take me as quick as they would take a 1[-A], but in '69 they stopped taking guys.'

He repeated: "I didn't dodge the draft. Get over it. That was a High Times magazine interview where I conveyed the story of my buddy, this great drummer KJ Knight [who played with Nugent in THE AMBOY DUKES]. It was hysterical. He completely ruined his entire life just to get out of the draft, which was cool because the Vietnam war was illegal. If I would have known what I know now then, I would have dodged the draft. Like Muhammad Ali. The Vietnam war was immoral; it was illegal. It was the military industrial congressional complex robbing taxpayers and getting Americans killed for no fucking reason at all. But I didn't dodge the draft. I wasn't smart enough. If I would have gone over there, I might have won the fucking war, okay?"

When High Times writer Glenn O'Brien interviewed Nugent in 1977, Ted said about how he supposedly got out of the draft: "I got my physical notice 30 days prior to [being drafted]. Well, on that day I ceased cleansing my body. No more brushing my teeth, no more washing my hair, no baths, no soap, no water. Thirty days of debris build. I stopped shavin', and I was 18, had a little scraggly beard, really looked like a hippie. I had long hair, and it started getting' kinky, matted up. Then two weeks before, I stopped eating any food with nutritional value. I just had chips, Pepsi, beer — stuff I never touched — buttered poop, little jars of Polish sausages, and I'd drink the syrup, I was this side of death. Then a week before, I stopped going to the bathroom. I did it in my pants. Poop, piss the whole shot. My pants got crusted up."

Nugent also explained that he was typically "extremely anti-drug" but "I snorted some crystal methedrine" in order to avoid the draft.

Perhaps giving some credence to Ted's version is the fact that Kenny Mills, the drummer who goes by the stage name of KJ Knight, claimed in his autobiography that he "used wild antics" at the Selective Service physical and was quickly dismissed from serving.

Fact Checker and the Reno Gazette Journal both obtained military records showing that Nugent got a student deferment, which is not "draft dodging" given that he showed up for the medical exam, according to a recent update from High Times. It was therefore determined that there's not enough evidence to definitively conclude that Nugent actually dodged the draft.

This past May, fellow rocker Joan Jett brought up Nugent's alleged draft dodging while responding to Ted's claim that she did not deserve to be on Rolling Stone magazine's list of 100 Greatest Guitarists. At the time, she said: "Ted Nugent has to live with being Ted Nugent. He has to be in that body, so that's punishment enough.

"He's not a tough guy. He plays tough guy, but this is the guy who shit his pants — literally — so he didn’t have to go in the Army. So this is the tough guy who's running around America, stirring things up against each other."