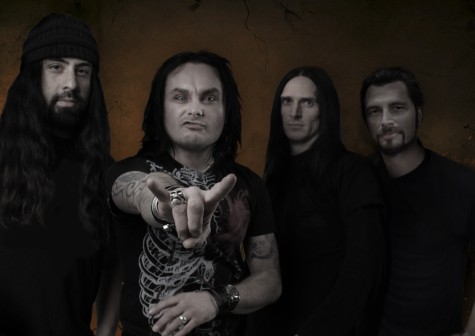 "Pyro", the weekly hard rock/metal heavy metal show which airs on the national radio station NRK in Norway, recently conducted an interview with Dani "Filth" Davey (vocals; CRADLE OF FILTH),Rob Caggiano (guitar; ANTHRAX, THE DAMNED THINGS) and Tom Cato Visnes (bass; a.k.a. King ov Hell; OV HELL, GOD SEED, GORGOROTH) about their collaborative project TEMPLE OF THE BLACK MOON. The five-minute chat, which includes audio snippets of songs that will appear on the band's forthcoming debut album, can be streamed at this location.

In addition to Filth, Caggiano and King, TEMPLE OF THE BLACK MOON features John Tempesta (drums; formerly of WHITE ZOMBIE and now drumming with THE CULT) and Arve "Ice Dale" Isdal (guitar; ENSLAVED).

Imagine a cauldron bubbling over with the unsavory flavors of TOOL and CELTIC FROST, and seasoned with the likes of IMMORTAL and AT THE GATES, and you'd be about halfway to describing the uncouth racket these guys have spat upon an unsuspecting planet.

Calling themselves the TEMPLE OF THE BLACK MOON, the group (who describe their output as "music for an evil film noir') are an eclectic stew of musicians/hell-raisers/miscreants who are putting the finishing touches on an album's worth of material in the darkest depths of Bergen, Norway. Songtitles thus far include "Infernal Desire Machine", "Don't Call Up What You Can't Put Down", "Dark Eyes For Trouble", "Beautifully Perverse" and "C.N.T (All That's Missing Is You)".

When asked about how the idea for the project came about, Caggiano said, "Years ago, I was in the U.K. working with CRADLE OF FILTH on the 'Nymphetamine' record. And I think it was at the end of the session, I was just about to go back to New York, I decided to stay in London for a couple of days. And GORGOROTH was actually playing. So I went to the show, and that's when Tom and I met; it was back in 2005, I think. We got really drunk and we started talking about working on music together, doing something different. Prior to that, Dani and I were talking about possibly doing something. One thing led to another, Tom and I started working on music, and we realized that we worked really well together and it just came naturally. . . But the whole thing is, we're all super busy with our other projects, so just scheduling has been a nightmare for a long time."

Regarding the TEMPLE OF THE BLACK MOON sound, Dani said, "A lot of people have speculated, 'Wow, it's got a guy from CRADLE OF FILTH, ANTHRAX and [GORGOROTH].' It's got a real rock base to it; and I know it sounds strange [to say]. It's heavy, but it's not too extreme. It's not [all] blast beats or anything like that, although we do have a couple of songs a bit like that — really fast. But it's catchy. I don't like using the word 'commercial,' because will think it's watered down, sort of, power pop, or pop rock. I think it's gonna surprise a lot of people. It's really hard to put it into context and say, it's a bit of CRADLE OF FILTH, ANTHRAX, GORGOROTH and THE CULT [laughs] . . . which sounds ridiculous." Caggiano added, "I don't think it sounds like any of our other bands. If it did, what would be the point?"

On the topic of TEMPLE OF THE BLACK MOON's plans for the immediate future, Filth said, "The reason we're here [in Norway] is to polish the songs. I mean, they've all been demoed extensively. It's just like putting the icing on the cake, really, so to speak. And, obviously, then to prepare the stuff for us to go into the studio, which is gonna be inevitable, soon. At the moment, we're just sort of negotiating with managers and labels. But the main important thing is the music stuff rather than the other way around. Rather than being on a label and then [going], 'Shit, we've gotta write an album now. We've got the funky hair, but we haven't got any songs.' We've got the funky hair and the songs."

Added Caggiano: "We are in the process of buiding our team right now, and obviously, it starts with the music. So that's kind of why we're here — just tightening up some of these songs so that we have a real solid representation of where we're at to show people. We could sit here all day and project when we're gonna do this record; none of it matters, 'cause there's so much stuff out of our hands."

Explaining the origins of the name, Filth had this to mutter on the subject: "We had an innumerable amount of names that never seemed likely to stick, that was until we put our proverbial heads together and narrowed it down to just three or four, and then tossed for it (proverbially of course) using a silver Norwegian crown (we couldn't find any proper money). The name TEMPLE OF THE BLACK MOON represents the rigorous worship of desire, (the black moon astrologically has always held association with the dark Goddess Lilith) and of course the ramifications of the lunar eclipse, always a herald for death and ill-omen."