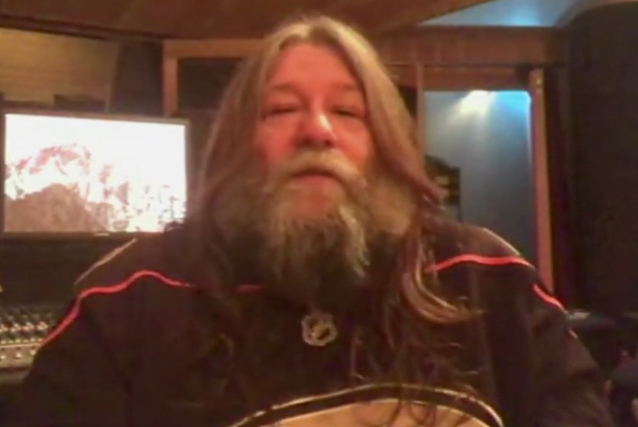 TESLA's BRIAN WHEAT Opens Up About His Eating Disorder: 'I Started Sticking My Fingers Down My Throat To Keep Myself From Gaining Weight'

TESLA bassist Brian Wheat, who is promoting his upcoming autobiography, "Son Of A Milkman: My Crazy Life With Tesla", spoke to KNAC.COM about how his bout with poor self-image led to a battle with an eating disorder and an attempt to control his weight gain by throwing up.

"Yeah, people think that those things are exclusive to 'supermodels' or something, but it's not," Wheat said. "The fact of the matter is I was a fat kid. I lost all of this weight. If you look at the photos of me during [TESLA's] 'Mechanical Resonance' album, I was a fat kid, then I lost a lot of weight. To be able to maintain that — we were out during that time where everyone was looking for that image, and MTV was huge. I started sticking my fingers down my throat to keep myself from gaining weight. I did that for three, four years. It was during '88, '89, '90 and '91 — that entire time period. I know what this is like, and that's a slippery fucking slope. I haven't done that in years."

He continued: "I'm heavier now, of course, but that's due to my autoimmune disease. I have taken [oral steroid] prednisone regularly. It’s hard to be thin and take prednisone at the same time. It's a steroid that puts a lot of weight on you; it bloats you, among other things.

"My weight fluctuates," Wheat added. "Today I'm more comfortable in my own skin.

"I want the guy or the girl in Des Moines, Iowa to read this and know that I'm just like them — they can overcome it, and there are other people that are experiencing the same problems.

"This isn't a gender thing. It happens to all of us."

"Son Of A Milkman: My Crazy Life With Tesla" will arrive on December 15 via Post Hill Press. In this 304-page hardcover book, Wheat lifts the lid on living the rock 'n' roll life while struggling with anxiety, depression and other issues seldom discussed by musicians.