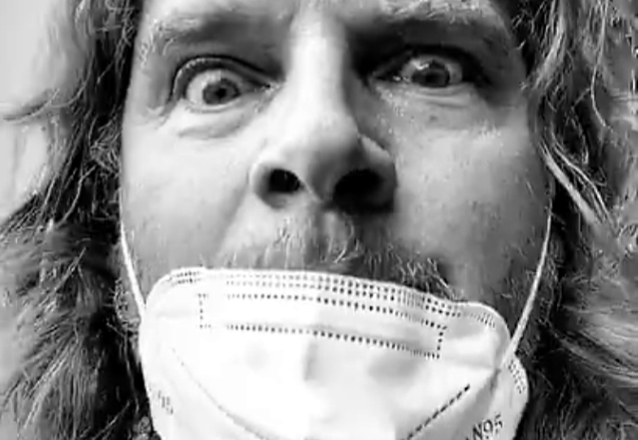 TESLA guitarist Frank Hannon says that he went through "a month of hell" after contracting COVID-19.

A month ago, TESLA announced it was postponing a few shows after Hannon tested positive for COVID-19, the disease caused by the novel coronavirus. At the time, Hannon wrote in a social media post that he had "not been able to move all week" and revealed that he woke up with a 102-degree fever and could "hardly breathe" on the day that TESLA was scheduled to leave for tour.

Now, in a new interview with Meltdown of Detroit's WRIF radio station, Hannon opened up about his COVID-19 battle, saying (as transcribed by BLABBERMOUTH.NET): "It kicked TESLA's ass pretty good — all of us. Myself, I got vaccinated, but it was a little too late. I was not wanting to get vaccinated, and I put it off too long. I got vaccinated and about a week later I played a gig and caught COVID and took it to the band by accident. And everybody got sick. It knocked me down for a month, man. It was a month of hell, not being able to breathe and in a lot of pain."

He continued: "People dismiss it as being, 'Oh, it's only a flu,' or, 'It's a cold,' or whatever, but I just lost three more friends — people in the industry that have died from it. So it's a very serious thing. And I don't take it lightly anymore, that's for damn sure."

TESLA played the first two shows of its summer 2021 tour — August 5 in Grants Pass, Oregon and August 6 in Grand Ronde, Oregon — without Frank. Filling in for him was Howie Simon (JEFF SCOTT SOTO, GRAHAM BONNET, STRYPER),who previously stood in for Hannon in September 2018.

TESLA will return to the the road on September 16 in Roanoke, Virginia.

"Myself, I didn't even do one show [of the summer run]," Frank told WRIF. "The morning that we were leaving to go on tour, I came down with a 102 fever. So I called one of my friends that plays guitar, and he filled in for me. They did another show up in Oregon, and they got sick. So we got the kibosh put on TESLA right away.

"Our first show [back] is coming up here next week," he added. "We had to cancel the whole run of August. COVID was a month-long ass-kicker for us. We're gonna be starting up here September 15th and going all the way till December. We've even got a show in Mexico. So we're gonna be rocking now. We've got a new way of handling it now. We're even more fired up and hungry now than we were gonna be even then. So, we're looking forward to it."

TESLA's latest album, "Shock", was released in March 2019 via UMe. The follow-up to 2014's "Simplicity" was produced by DEF LEPPARD guitarist Phil Collen.