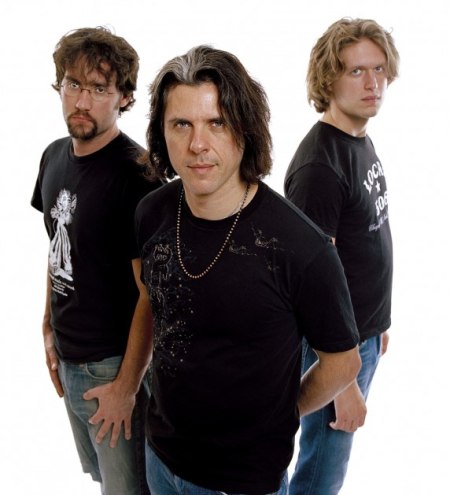 TESTAMENT/ex-SAVATAGE guitarist and leader of ALEX SKOLNICK TRIO, Alex Skolnick, was interviewed for the latest edition of "The Metal File" podcast from Montreal's CHOM-FM. You can now stream the chat using the audio player below.

ALEX SKOLNICK TRIO recorded a cover version of the METALLICA classic "Fade To Black" for its fourth album, "Veritas" (Latin for"Truth"),which arrived in stores on Tuesday (March 29). You can now stream the track at DecibelMagazine.com.

"The new album was going to be all original and no covers, but it seemed a shame not to at least try an arrangement of 'Fade To Black', which been on the back burner for a few years now," Skolnick tells Decibel. "As if we needed a further sign, we received thumbs up from two members of METALLICA — Kirk Hammett, who spoke highly of the trio in print, and Rob Trujillo, who jumped up on stage to jam with us during our soundcheck at Radio City Music Hall. The song felt like a great choice for its use of melody, both in the vocals and the guitar, as well as a mood that is more reflective than aggressive… very bold for METALLICA who was so associated with hyper speed, punk-like metal at the time.

"Coordinating with the original arrangement gave us an opportunity to experiment with some ideas that were unusual for us — a loop reinterpretation of the opening riff, the intro lead guitar licks quoted and doubled by jazz guitar and the upright bass, the main body of the song played to a pulsating, fast groove instead of a ballad and a drum solo in the middle of the tune instead of the end."

ALEX SKOLNICK TRIO will perform at Best Buy Union Square in New York City on Tuesday, April 5 at 7 p.m. The group will play a 20-minute set followed by a 20-minute guitar clinic with Skolnick. After that the TRIO will sign copies of "Veritas".

Buy "Veritas" at Best Buy Union Square starting March 29 at 12:01 a.m. and get a wristband to meet the ALEX SKONICK TRIO. Not in New York City? You can stream the event live at this location.

A six-minute preview video for "Veritas" can be viewed below. The CD is AST's first release on innovative jazz label Palmetto Records. The 11-track album contains nine original compositions, a cover of METALLICA's "Fade To Black" and a bonus remix of the song "Bollywood Jam" by Jay Sustain and Nik Chinboukas. The record was produced by Alex Skolnick and recorded at Spin Recording Studios in Long Island City, New York.

Alex Skolnick is a true guitar hero. At sixteen years old, he joined a group of twenty-somethings who'd formed a thrash metal band called TESTAMENT. Alex stayed with the band through five critically acclaimed albums and countless tours with, among others, SLAYER, MEGADETH, JUDAS PRIEST and WHITE ZOMBIE. After hearing and seeing one of Miles Davis' electric bands on TV, Alex relocated to New York City to play and study jazz.

ALEX SKOLNICK TRIO (AST) was formed while Alex was earning his BFA in jazz from New School University in Manhattan. AST has been lauded by critics, fans and musical heroes alike ranging from Downbeat to Jazziz to the Village Voice to Kirk Hammett of METALLICA.

"Veritas" will become a favorite of music fans that enjoy some of the pillars of jazz guitar — Scofield, Pat Metheny, Wes Montgomery, Bill Frisell, Jim Hall and George Benson — but recast from an edgier and more energetic perspective. "Veritas" is poised to further push the boundary of contemporary jazz as fans of harder rock and metal are fast becoming a significant new audience in jazz. It is this fast-growing group of listeners that forms the core fan base of AST. They want truth in live performance, they want truth in great songs, they want "Veritas".