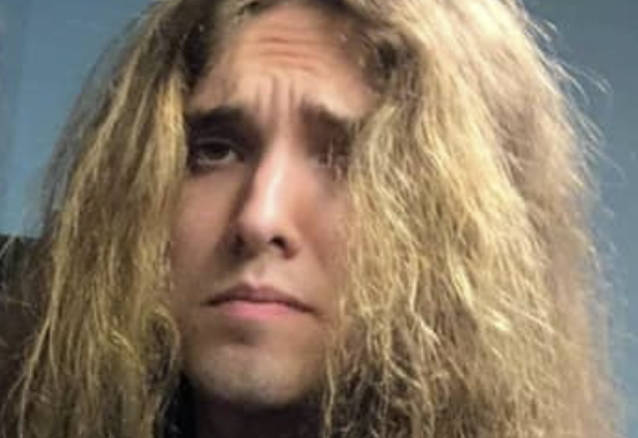 SEVEN SPIRES drummer Chris Dovas will sit behind the kit for TESTAMENT on the first six shows of the summer/fall leg of "The Bay Strikes Back Tour". He will be filling in for regular TESTAMENT drummer Dave Lombardo, who is unable to make the dates due to a scheduling conflict with the MISFITS.

On Tuesday (September 6), TESTAMENT guitarist Eric Peterson shared a photo of him, Dovas and TESTAMENT bassist Steve DiGiorgio, and he included the following message: "Yo! Chillin with Stevie D and Chris Dovas after rehearsals today! By the way, Mr. Lombardo will be playing a show with the MISFITS on the 17th and joining us in Saint Petersburg Florida until then we are in good hands with Mr. Dovas I think folks will be surprised! See ya all soon!"

Dovas will play drums for TESTAMENT at the following dates:

On September 17, Lombardo and the rest of the current lineup of MISFITS will headline Riot Fest 2022, performing the band's landmark first album "Walk Among Us" in full for its 40th anniversary.

In March, TESTAMENT singer Chuck Billy told the WSOU 89.5 FM radio station that he didn't expect Lombardo to focus only on TESTAMENT in the coming months. "I'm not holding my breath that Dave just is in TESTAMENT only but we're gonna have to kind of maneuver around what happens," he said. "But then again, this is the beginning of the relationship. We might be busy enough and he might just be happy enough just working with us and it works out. So we're just kind of taking it one day at a time, one tour at a time. We know he's gonna be with us for the next three tours — we know that for sure — so we'll see what happens after that."

Lombardo told SiriusXM's Liquid Metal that he reached out to the TESTAMENT camp the same day that the band announced it was splitting with Hoglan.

"I was still asleep, and my wife, she just said, 'Hey, Gene just left TESTAMENT,'" Dave recalled. "And she's been always telling me, 'Man, I can't wait for you guys to get together for that 'Gathering' reunion.' 'Cause we had been talking about this two and a half, three years ago — before the pandemic. And so I immediately — I didn't even get my other eye open and I was texting Chuck. I said, 'Hey, man, what's going on?' I don't know exactly what I mentioned in my text, but it was very simple, 'Hey, what's happening?' And he immediately called me back. And I remember Tiffany [Chuck's wife] was on the phone; Chuck was on the phone. We were, like, 'Hey.' It was a great come-together moment, like, 'Hey, here we go. This is the moment we've been waiting for.'"