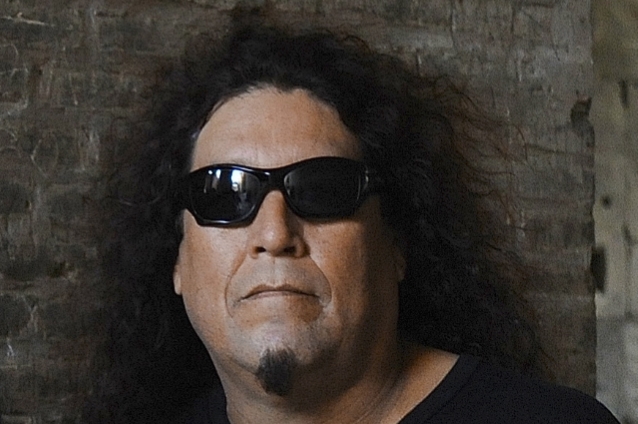 TESTAMENT singer Chuck Billy says that he understands why certain rock and metal artists rely on off-stage backing musicians or use pre-recorded tracks during their live performances.

In recent years, more and more bands have been given a pass for using backing tracks, drum triggers and other assorted technology that makes concerts more synthetic but also more consistent.

Asked by "The Cassius Morris Show" if he feels that an over-reliance on backing tracks and extra musicians can fatally hamper the immediacy and spontaneity of a concert, Billy said (hear audio below): "Well, I guess to each his own, but we were out with HEAVEN & HELL, for example, and the keyboard player and background singer, he wasn't on the stage — he was behind the backline. Sometimes [he was] even set up outside, off the stage. [Laughs] But, you know, it's an important part to the show; he adds that element. And maybe they're just not known for the keyboard to be on stage. So each band has their own approach, I guess. And a lot more people experiment with more samples or the drummer taking control of a lot of stuff going on — you know, they keep the tempo and run all the effects and background vocals and rhythm guitars from the drummer's starting position. So a lot's changed now, for sure."

He continued: "I guess it all depends for how each band is and what they feel. If they're represented as a four-piece and [they] don't want the keyboard player and the saxophone player in the photo and on stage, I can understand it. Or if it's all sampled, just so they don't have those members on stage, I understand that as well."

Billy said in an interview with "Talking Metal" that TESTAMENT is hoping to enter the studio in January to record the follow-up to 2016's "Brotherhood Of The Snake" album. He also confirmed that TESTAMENT is planning to use British metal producer Andy Sneap (JUDAS PRIEST, ACCEPT, ARCH ENEMY, SAXON, MEGADETH) once again to mix the upcoming disc.

"Brotherhood Of The Snake" was recorded under the watchful eyes of producer Juan Urteaga (EXODUS, HEATHEN, MACHINE HEAD),guitarist Eric Peterson and Billy and was mixed and mastered by Sneap.

TESTAMENT's U.S. tour as the support act for SLAYER wrapped on August 26 in San Jose, California.