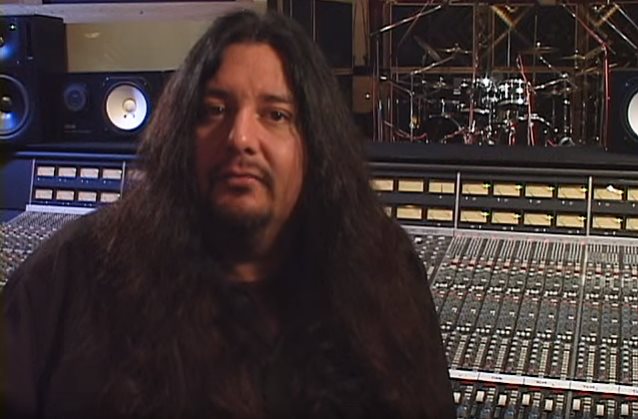 Legendary extreme metal drummer Gene Hoglan (TESTAMENT, DARK ANGEL, DEATH, FEAR FACTORY, STRAPPING YOUNG LAD, DETHKLOK) was interviewed for the "Metalheads United" podcast this past March in Calgary, Alberta, Canada. You can now listen to the chat using the Mixcloud widget below. A couple of excerpts follow (transcribed by BLABBERMOUTH.NET).

On writing music on guitar:

Hoglan: "I play more guitar than drums these days. That's been true throughout history. As a drummer, I'm okay, but as a guitarist I'm badass! I'm not much of a lead player, but I can play rhythm like crazy. And I can play thrash like nobody's business. I'll take the Pepsi challenge with any thrash guitarist. I'll play riffs you cannot.

"That's the thing about being a drummer that writes riffs. A lot of times I'll write riffs and guitarists are just, like, 'What in the world is that? I can't figure that out?' [I would] be showing stuff to Devin [Townsend, STRAPPING YOUNG LAD] and Devin's, like, 'I've got no idea what you're playing and how do you do that.'"

On whether writing riffs helps him come up with more suitable drum parts:

Hoglan: "Absolutely! I see the entire song. When I start writing something, I will see the entire scope — samples and orchestrations and all that sort of stuff. I'm writing for ZIMMERS HOLE, I'm writing for the new DARK ANGEL stuff. I'm writing heavily on that. It keeps you busy. It keeps you focused. You can't sit around the bus and play drums all day, but I suppose you can sit there and think up riffs in your head all day. So that's what I do."

Hoglan: "Right at the moment, we're writing the next record — Jim Durkin [guitar] and I — and we want the album out. We wanna write the record, get it released and then proper touring. Right now we're just kind of doing a little spot date here and there where we try to do what we can until that record is recorded. It's a new ballgame then."

On the DARK ANGEL songwriting process:

Hoglan: "With DARK ANGEL, I write the riffs, I write the vocals, I write the melody lines. Everybody has a lot of input. [I tell the other guys in the band], 'I wanna make it so it's fun for you guys to play.' I try to now tailor the riffs towards everybody's comfort level, so I try not to write the super-technical, weird strums, but I do have them. We have the options in the writing of… That machine-gun double-bass sort of thing that is really popular with everybody now? We created that. We did, on 'Leave Scars'. I created those kind of beats on my toilet. 'Cause I had a wood floor, so I would just tap my feet, and I would just [be like], 'Okay, well, you've got that little pattern on your feet. Write it on the guitar now.' Whoever wants to use this talent… Because I will definitely bring some stuff that you're not thinking of. I'm chock-full of riffs, and I'm chock-full of ideas, and if you wanna tap into it, awesome. And if you don't, that's okay; somebody else will."

"When it comes to writing [the new DARK ANGEL] record, that's challenge, because I'm just not home. The way we write — Jim and myself — we get together in a room [and] we throw riffs around. When I'm gone for seven months straight, it's a challenge. We've tried the Skype thing and trying to write riffs over Skype and FaceTime and all… We've tried that [and it didn't work]. [Being in a room together] is just how it works for us. And we've come up with great stuff. The DARK ANGEL album is gonna be fucking amazing, 'cause I'm writing the coolest shit I've ever written, and I'm here to blow everybody away."

On whether playing with so many bands has helped him sharpen his songwriting skills:

Hoglan: "Absolutely. That's one of the boons of writing and playing in all these bands, 'cause everybody you play with, you learn something from — everybody, whether it's Bobby Koelble from DEATH or [TESTAMENT's] Eric Peterson. Eric was the first guy that had me kind of rein in my craziness to suit the song. Back when we were doing [TESTAMENT's] 'Demonic' [album], Eric was a big influence on that, just saying, 'Hey, don't worry about being so busy and doing every single note.' 'Cause I had just come off [recording DEATH's] 'Symbolic' [album], and that was one where I was, like, I just played every single drum thing imaginable — every gap was filled; there was no breathing, there was no anything. And Eric taught me how to breathe, so that was very cool."

Hoglan: "Well, we did go away for a long time, but I've kept the notion alive, I've kept the fact that, yes, there is DARK ANGEL; I kept that alive rather than letting that be one of those bands just disappeared — like a good thrash band that just went away and you don't hear [from again]."