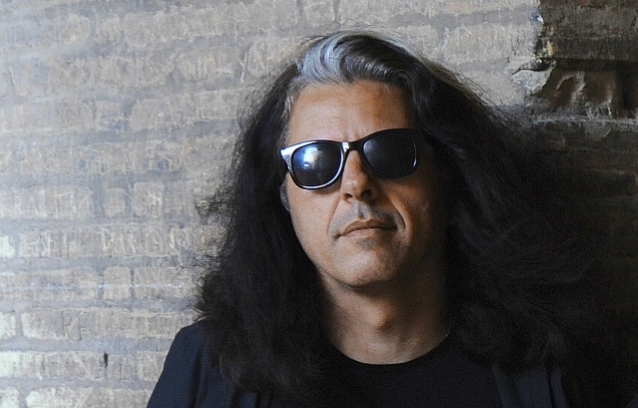 TESTAMENT guitarist Alex Skolnick has defended Mitt Romney after the Utah senator announced Wednesday he would vote to convict President Donald Trump in the impeachment trial. Romney will be the first senator in U.S. history to vote to remove a president of the same party from office.

The president faces two charges: abuse of power and obstruction of Congress. Romney said he will vote to convict on the first article of impeachment and acquit on the second.

After conservative activist Charlie Kirk tweeted earlier today that Romney "should be ashamed" and urged "the people of Utah" to "RECALL Mitt Romney NOW," Skolnick responded: "Tempted to act like some of you & say something like 'CONSERVATIVE TEARS!!' or 'UNHINGED RIGHT!!' But no, y'all can keep that behavior. Instead think about this: @SenatorRomney & @justinamash have longtime conservative cred. They're now blacklisted, purely for #HeWhoCanDoNoWrong"

In a speech on the Senate floor, Romney explained how his Mormon faith influenced his decision, saying: "As a senator juror, I swore an oath before God to exercise impartial justice. I am profoundly religious. My faith is at the heart of who I am. I take an oath before God as enormously consequential. I knew from the outset that being tasked with judging the president, the leader of my own party, would be the most difficult decision I've ever faced. I was not wrong."

Romney went on to say that he believes Trump abused the power of his office when he asked Ukrainian President Volodymyr Zelensky to investigate allegations regarding the son of former Vice President Joe Biden, a potential political rival for his reelection. He added that while he would vote to acquit on the charge of obstruction of Congress, Trump's actions towards Ukraine violated his oath of office, were "grievously wrong," and demanded removal. "There's no doubt in my mind that were there names not Biden, the President would never have done what he did," Romney said.

Skolnick has made no secret of his political views, frequently tweeting against Trump's policies, including imploring the U.S. president to "get the HELL out of OUR country" in August 2017 after Trump tweeted about his proposed border wall while Tropical Storm Harvey made landfall in Texas.

Back in 2012, Skolnicktweeted that Ted Nugent, Donald Trump and Dave Mustaine didn't "seem that reasonable" to him because of their "militant" support of then-Republican presidential candidate Romney.

Tempted to act like some of you & say something like “CONSERVATIVE TEARS!!” or “UNHINGED RIGHT!!” But no, y’all can keep that behavior. Instead think about this: @SenatorRomney & @justinamash have longtime conservative cred. They’re now blacklisted, purely for #HeWhoCanDoNoWrong