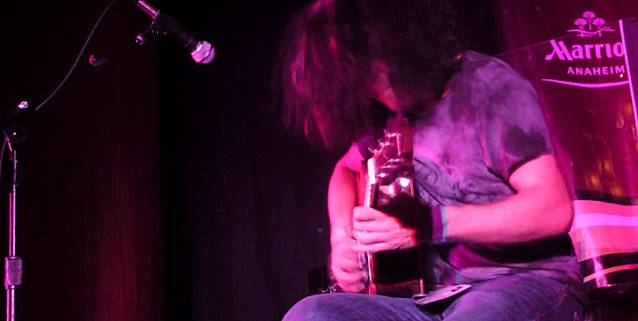 TESTAMENT and ALEX SKOLNICK TRIO guitarist Alex Skolnick is "immersed in global rhythms," working on his first acoustic album with PLANETARY COALITION for a spring 2014 release. The entire process is being documented via Artist Share, a platform that connects creative artists with fans in order to share the creative process and fund the creation of new artistic works.

Skolnick played a set of PLANETARY COALITION tracks at this year's NAMM (National Association Of Music Merchants) show, which took place January 23-26 at the Anaheim Convention Center in Anaheim, California. Video footage of the performance can be seen below (courtesy of Capital Chaos TV).

An ethnically flavored collective of diverse musicians from all over the world, PLANETARY COALITION is driven by the acoustic guitar of Skolnick, whose work spans jazz (ALEX SKOLNICK TRIO),metal (TESTAMENT),and world music (RODRIGO Y GABRIELA). Its mission is to tie together the virtuosity of jazz, the power of metal and the passion of the musical styles of Gypsy, Middle Eastern, Mediterranean, Indian, Asian, African, Latin and other indegenous lands. Through the universal language of music, PLANETARY COALITION intends to bridge the gap between different cultures, increase ecological awareness and explore the threads that connect musical expression with regional identity.

PLANETARY COALITION is more than a band; it is a collective of people from many different walks of life and various regions of the globe.

In an interview with Chris McGovern, Skolnick stated about PLANETARY COALITION: "It's a bit of an ambitious project, and it's going to be my first crowd-funded project, but basically it's going to be my first acoustic album, my first world music album, and it'll have some electric as well. But that's just the musical side of it. I've already written some music for it and recorded it with some great local musicians, including Max Z.T. and violinist Rachel Golub. Depending on how things go, the goal will be to involve musicians from all over the world, from different cultures and regions, and to write music around them, collaborate with them, and eventually have a social component too, where we actually tell the story of some of these regions — the untold story from their perspective, including slide shows, video, etc. It's a vision I've had for a while now, and the few times I've performed the music, the response has been very good. Even on this metal web site, BLABBERMOUTH.NET, where they hate everything, they actually seemed to really like this music. Even though it's not metal music, it has an intensity."