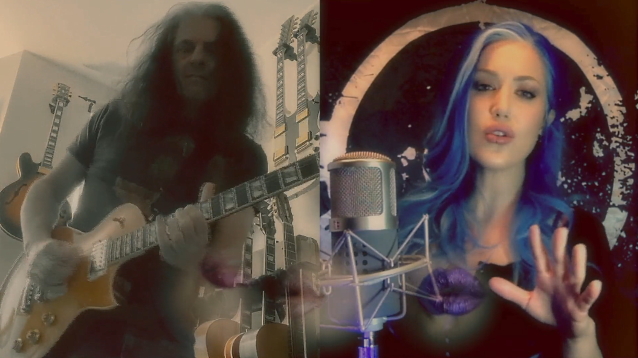 TESTAMENT guitarist Alex Skolnick has teamed up with ARCH ENEMY singer Alissa White-Gluz to record a cover version of the QUEEN classic "We Are The Champions". A quarantine-style video for their rendition of the song can be seen below.

Regarding how the collaboration came about, Alex says: "Last spring, when lockdown 'challenges' were all the rage, we'd been among more than a dozen musicians and singers answering [QUEEN guitarist] Brian May's call in a wonderful, elaborate all-star video in tribute to first responders ([go] back to last spring to see the full version, with a different vocalist singing each line). For this we created a straight through 'jamming' version, with her voice straight through and remixed by yours truly (not easy, but a fun challenge!).

"This is a special video posted on both of our Patreon accounts (thank you, patrons!) as a gift during the holidays. Now we are announcing it as it is available to view for all. Enjoy!"

Skolnick joined TESTAMENT in 1985 at the age of 16 and stayed with the band for eight years before leaving in 1993 and going on to study at the New School for Jazz and Contemporary Music. He rejoined TESTAMENT as a full-time member in 2005.

In addition to playing with ALEX SKOLNICK TRIO and TESTAMENT, he has worked as a sideman with such artists as vocalist Ishtar of the French band ALABINA and Jewish folk singer Debbie Friedman. He has also guested on an album from RODRIGO Y GABRIELA.

TESTAMENT's latest album, "Titans Of Creation", came out in April 2020 via Nuclear Blast.

Alissa has spent the last few years working on her long-awaited solo album, to be released via Napalm Records. The effort is expected to include contributions and collaborations with past and present members of ARCH ENEMY and KAMELOT, as well as MISFITS guitarist Doyle Wolfgang Von Frankenstein.

Alissa said in a 2017 interview that the idea for a solo project came about as a suggestion from ARCH ENEMY's former lead singer Angela Gossow, who has been managing the band's career for a decade and also oversees Alissa's personal affairs.