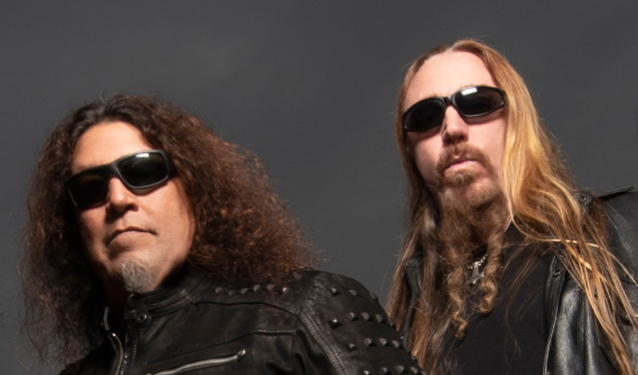 TESTAMENT's Chuck Billy says that he doesn't think Steve DiGiorgio "would have lasted" very long as a member of MEGADETH had he been asked to join the band.

The longtime TESTAMENT bassist temporarily stepped in to record the bass tracks on MEGADETH's latest album, "The Sick, The Dying… And The Dead!", in the summer of 2021, shortly after the exit of David Ellefson. With the kick-off of MEGADETH's recent tour, MEGADETH alumnus James LoMenzo rejoined the MEGADETH family as permanent bass player.

Billy discussed DiGiorgio's involvement with the new MEGADETH album during a September 13 appearance on SiriusXM's "Trunk Nation With Eddie Trunk". Asked if he was concerned that TESTAMENT might lose its bass player to MEGADETH, Chuck said (as transcribed by BLABBERMOUTH.NET): "Well, of course. We're definitely always concerned that… We've had so many lineup changes, it wouldn't faze us. But Steve's an important part of the band; he was a great addition when he came back. And we went through a lot together personally. So, of course, when you get the opportunity to play on it, and I'm sure they were courting him to join the band. I'm glad he made the decision to stay with us."

Billy continued: "I think his intentions always were just, 'I'll go record the record,' 'cause that's what Steve does — he plays on a lot of people's albums. So we kind of took it as that at first. And I thought, 'That's what he does.' 'Go for it, Steve. Just don't leave.' [Laughs] And I'm sure they asked him to join the band. And he decided, 'You know, I've been with my bros here for a long time. I'm gonna stick with my bros.'"

According to Chuck, MEGADETH drummer Dirk Verbeuren "had a lot of influence getting Steve" the MEGADETH recording gig because Dirk is "really good friends with Steve and they've done a lot of projects together." However, Billy added that he doesn't "personally think Steve would have lasted in the band. I know Steve very well, and I know Dave [Mustaine, MEGADETH leader] very well, and I'm sure the two worlds would have collided," Chuck said with a laugh.

Last month, Mustaine discussed his decision to hire DiGiorgio to lay down the bass tracks on "The Sick, The Dying… And The Dead!" during an appearance on Full Metal Jackie's nationally syndicated radio show. Asked what he appreciates most about DiGiorgio and LoMenzo musically and as people, Mustaine said: "I think that both of them are really fun people to be around. Although I didn't know Steve DiGiorgio as much as I know James LoMenzo, I found him to be just as enjoyable to be around as James was."

Referencing the fact that Ellefson was fired from the band in May 2021, just days after sexually tinged messages and explicit video footage involving the bassist were posted on Twitter, Mustaine said: "I think the band and everybody that's associated with us, that period that we went through was a little touchy. So we wanted to do the right thing. And trying to find the replacement for anybody, I think, wasn't the right thing to do at the time because nobody really knew all the facts and I certainly didn't want to poach anybody. Not from TESTAMENT — they're my friends — and I don't think from anybody."

Mustaine, who was a member of METALLICA for 11 months before being fired in 1983, continued: "As great as Steve is, I remember what it felt like when we [METALLICA] went up and poached Cliff [Burton] from TRAUMA. I mean, granted, the band TRAUMA wasn't that good, but there are still guys in the band and their lives were changed when that happened.

"I tend to believe that… You've gotta ask yourself, 'Did he jump or was he pushed?' And I like to make sure, if I was gonna hire somebody, that I wasn't stealing him from anybody."

Two years ago, Billy touched upon some of the friction that had existed between TESTAMENT and MEGADETH on his band's first-ever U.S. arena tour, which took place in 1990, with JUDAS PRIEST as the headliner and MEGADETH as additional support. In an interview with MACHINE HEAD frontman Robb Flynn's "No Fuckin' Regrets With Robb Flynn" podcast, Billy said: "For the PRIEST tour, we decided we were gonna spend some time on production. We bought a big, fancy Voelker Rack drum set. We bought two new scrims, full-on backline — the whole deal. Nice-looking show. And we get to the first show, and Dave Mustaine sees us have it up, and he says we can't use it. [So] we had a little problem the first week of the tour."