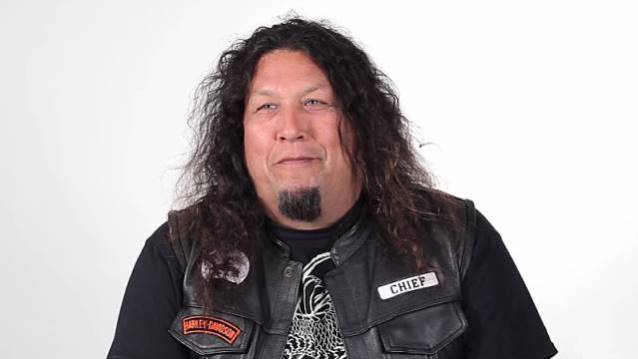 Vocalist Chuck Billy of San Francisco Bay Area metal veterans TESTAMENT was interviewed on the May 30 – June 1 edition of Full Metal Jackie's nationally syndicated radio show. You can now listen to the chat using the Podbean widget below.

Full Metal Jackie: We're here to talk about not just TESTAMENT, but Chuck Billy the businessman and part of a new management team, Breaking Bands, LLC, who have recently signed two bands, FORREST DAY and SHATTERED SUN. Chuck, you bring unique experience to band management with Breaking Bands. Knowing what it's like to actually be in a band, what aspect of all your years on tour and in the studio with TESTAMENT will serve you best when it comes to managing other bands?

Chuck: Well, you know, being in the business for so many years, and, you know, being in TESTAMENT and going through the climate changes of music and industry and production aspects of where it started, and where we started and where it's at today. I think I've got just a lot of insight on things, I guess, what to do, and what not to do. And I think with Breaking Bands, with me and Jonny [Zazula] and Maria [Ferrero], I think it's kind of collectively a cool team that we have, because Jonny being, you know, owning Megaforce Records for so many years and signing a lot of bands and cutting deals and Maria having her PR firm and me just being on the road, we kind of all have our little area of knowledge that we put together with the acts we're signing. You know, EXODUS was actually the first band that we have, and, you know, we're doing some really good things with EXODUS right now, and their new record's coming up soon and there's a lot of exciting things in the works, you know. But we're also trying to really look for new bands. There's so much to offer out there that's so new in the industry right now, and that's what we're kind of looking for.

Full Metal Jackie: Chuck, being a great band these days seems like it's not enough. It seems like there's so many factors involved when it comes to breaking an artist. What intangible factors did you hear and see that made you think FORREST DAY and SHATTERED SUN would be good bands to represent?

Chuck: Well, first of all, FORREST DAY, that was kind of, they're… I mean, when you think of our team, the first thing you think is, "Oh, they're just gonna look for metal bands." And that's definitely not the case. We're just looking for talented people. And I think when I'd first seen FORREST, I'd seen them perform at the Jason Becker benefit show. And they just blew me away. The sound was so new and fresh and the singer was really talented and he plays a saxophone, and it was just really different. I talked about them for about three weeks, and when I'd finally seen them at the TESTAMENT studio — we just happened to rehearse at the same place — I started talking to him and got some more of his music, because there was, like, two or three songs that really stood out to me. And it just, I don't know, it just tweaked my ear, just the sound and the horn section and his great vocals. And, to me, I thought, he was just a great talent, first of all, before thinking about anything else. So I think that's where Forrest, really, like, shined for me. And SHATTERED SUN was another act that was some kids from Texas, and they're more metal. And I think they have a little more of what's going on today with newer metal acts that's just real brutal but really melodic. They're just a bunch of good young kids that are really hungry and really willing to learn, and I thought it would be a great project for us to kind of, like, you know what?! We could really help guide these guys to do some good things.

Full Metal Jackie: Chuck, your partners in Breaking Bands, LLC had a hand in breaking TESTAMENT back in the day. Jon and Marsha Zazula and Maria Ferrero were the Megaforce Records team that released the first four TESTAMENT albums. How did the four of you balance each other to make a well-rounded management team?

Chuck: Well, I mean, since it's the first for me in management, I think all of us, I think definitely everybody's individual experience comes in. 'Cause we all have our little area. Like, for me, I'm the road dog, I know, I do a lot of the touring stuff and production stuff and touring expenses and stuff like that. Where Maria, she handles a lot of the promotion and marketing. And Jon and Marsha really are into more deals and contracts and stuff. It's nice. It's kind of unique because we all are kind of learning from each other. There are little areas of what we have to offer, which is kind of cool, and it's… I go way back with those guys, and I've always had a good relationship with them, and it's just a really good thing. Like, you know, I talk to Jonny and Maria, like, every day now, and we're having a really good time with it, but it is a lot of work, you know. When we first decided, let's do this, you know, it's always easy in thought, but 'till you actually get it running, it's a lot of work.

Full Metal Jackie: Chuck, the last few years have been really productive for TESTAMENT. The last two albums, "The Formation Of Damnation" and "Dark Roots Of Earth" were strong and really well received. What's made TESTAMENT even more of a force now compared to when you were a bunch of kids in the Bay Area thrash scene?

Chuck: I think we finally grew up. [laughs] At times when you're younger, and you've got so many bands, it's kind of a competition. I think from "Formation" to "Dark Roots", we kind of, especially having the original lineup back together, something about that kind of put our minds at ease. Like, you know what?! We're playing for ourselves, we're trying to write music that makes us feel good and happy, and be proud of. And I think people get it. And I think it makes us be better artists and songwriters. We're just writing with a little more confidence. And it's proven. Something about that is the right thing for us. And it's great We're touring harder than we have in a long time; we've really been touring a lot. It's been great. We're getting along; there's no issues. [laughs]. So I think it's working again.

Full Metal Jackie: Chuck, anything you can tell us about what's happening with TESTAMENT?

Chuck: We're working on a new record right now. Me and Eric [Peterson, guitar] are just getting together, coming up with new ideas and riffs. And I think within the next couple of months, we're going to all get together, Gene [Hoglan, drums] and Alex [Skolnick, guitar] are busy right now, so me and Eric are doing most of the work right now in getting it done.