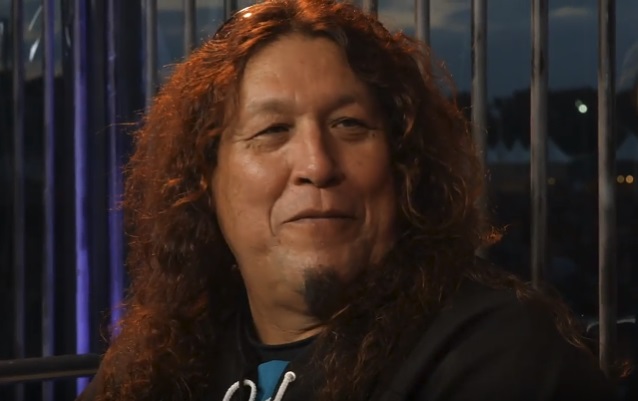 TESTAMENT frontman Chuck Billy said he "wanted to strangle" guitarist and primary songwriter Eric Peterson during the making of the band's 2016 "Brotherhood Of The Snake" album. While the disc is considered a worthy addition to the band's deep and influential catalog, both Billy and Peterson have expressed varying views on the rushed and impromptu nature of its creation, one that saw lead guitarist Alex Skolnick, bassist Steve DiGiorgio and drummer Gene Hoglan largely left out of the songwriting process. Billy, however, did add that upon the album's completion, he and Peterson made up "like brothers."

In an interview (see video below) with Canal Metal at the tenth edition of the Alcatraz Hard Rock & Metal Festival, which was held August 11-13 in Kortrijk, Belgium, Billy was asked to describe the songwriting approach for "Brotherhood Of The Snake". "Because of the last record, 'Dark Roots Of Earth', the pace of the songs after writing them, they're great songs, but the pace was not thrash," Chuck said. "So we're, like, 'Come on, we're a thrash band. We need to write a thrash record.' So, going into the writing of 'Brotherhood', we knew that we wanted to kick the tempos up — that was the first goal. I think we succeeded with that. Also, I just didn't want to have something typical: 'Okay, play fast. Sing fast. Just do it.' It was a challenge for me, actually. I knew I could have done the simple way out and just dove in, but I want to flow in and find some melody in and add some power and some death vocals. I think I found a good space for my vocals on this record."

He continued: "I think the fan appreciation has been following since the record came out. I think it's definitely some of the best work we've done, ever, really. It has a culmination of everything we've done from the beginning, thrash, to our mid-years, where it was more slower-paced and melodic, more of our death, a few years back, then we've found ourselves again, but took a little bit of everything and smoothed out and made it all work. I think it's a very comfortable spot for us. Now that we're playing [the songs] live, this was the first record that we played five songs off a new record live. Bands just don't do that. When you have a new record, you'll pick maybe one or two songs, then you'll start with that. We dove in with five songs right away on the first tour out, so we knew right then that these songs are special and they're really built for the live setting. I can't wait until we get to play the whole record as a show. I think that would be awesome."

Billy, who joined TESTAMENT in 1986 (then known as LEGACY) as a replacement for original vocalist Steve "Zetro" Souza (who left to join EXODUS),became one of the most identifiable singers in thrash because of his ability to sing melodically. Chuck was asked where this influence came from and how he incorporated it into TESTAMENT.

"For me, where I grew up, coming into this band, I was trained more of a melodic singer," he said. "I'm older than the other guys, so they were coming up with thrash and METALLICA and MERCYFUL FATE kind of stuff. My time was more THIN LIZZY, UFO and more melodic-styled singers, so when I joined the band, I knew I didn't want to lose that and when I joined the band, the songs were already written, so I had to learn Steve Souza's songs, which really trained me how to become a thrash singer. The second record ['The New Order'] I got to do it myself and that's where I found my own [style]. Our third record 'Practice What You Preach', is where I brought back the melody again and the songs were more melodic. I really wanted to find that again on this record, have that same tone and the same melodic presence. I think it really works because I mixed it with some death vocals and screams. It works. It was a challenge for me. We didn't take the high road, just say 'Okay, we're going to write and let's just go.' We really took our time."

Billy was then asked to explain how TESTAMENT wrote all of "Brotherhood Of The Snake" with the bandmembers living in separate parts of the U.S. "We don't live near each other anymore," he acknowledged. "Alex lives on the East Coast in New York and Gene's in Southern California and me and Steve are up in the Bay Area and Eric is in Sacramento. We're not close anymore, so we work by e-mail or me and Eric would get together and do most of the demos and send it to the rest of the band to learn it. But it was challenging because Alex, Steve and Gene were very busy during the writing process, so they didn't really get a chance to contribute. A lot of it was on me and Eric.

"When it came time to do the recording of the record… we wanted to have a record out last year, so we knew that we had to be in the studio by June 15th, so we're approaching that time close to the tour, like, 'Man, we got to get in the studio or we're not going to have a record this year,'" he recalled. "We kind of just put ourselves in a corner and said, 'Book the time, even though we didn't rehearse the songs, we didn't get to demo the songs, let's just go.' By doing that, it put everybody's backs against the wall. I think it really drove everybody to get a little more creative and be a little more adventurous and be sporadic and your first impression on something is usually the right one. When they felt the songs and learned them, their first impressions is really what got laid down on the record. It really was solid, especially for Gene. He came in, didn't hear any of the songs with vocals at all up until the point he started recording the record. No leads, he didn't hear anything. He was probably just frustrated, just like, 'What the hell am I doing? I don't know the songs.' But he pounded the drums so hard. He laid down a great foundation for the rest of us to come and in and do our parts. It was a really strange process, but in the end, I think we had to go through that process to make this record what it was. It was very special, this record, just because it was tough, but in the end, everybody pulled through and kicked ass."

The unorthodox making of "Brotherhood Of The Snake" was a topic Billy addressed repeatedly during press rounds for the record. He was asked if TESTAMENT would stick with this recording formula going forward. "I did tell Eric right after the record, I said, 'It's great, but I don't ever want to do that again.' I wanted to strangle him; it really got pretty intense between us. But in the end, we fight like brothers because we've been doing it for 30-some years and we make up like brothers. And we get through it like brothers."

Billy and Peterson have remained the only constants in TESTAMENT, having weathered several lineup changes and a noticeable drop in popularity in the latter half of the '90s when their style of thrash metal had fallen out of favor. Billy was asked to describe his relationship with Peterson, who is the band's driving force. "[It is a special bond], but I think he's learned to put up with me because sometimes maybe I bully him a little bit and get my way," he said. "It's a special thing. I think Eric is truly the main guy in TESTAMENT who keeps TESTAMENT sounding like TESTAMENT because he loves his black metal and stuff like that, but he doesn't really push it into the band. He doesn't really listen to other new bands or what other new bands are doing. He's really focused on what he does. I think that's what always kept TESTAMENT special and kept our identity. You hear TESTAMENT, 'That's TESTAMENT, I can just tell by the way it sounds.' We're fortunate enough that Eric has focused for 30 years just on his own."

"Brotherhood Of The Snake" was released in October 2016 via Nuclear Blast. The cover was once again created by renowned artist Eliran Kantor, who also handled the art for the TESTAMENT's previous album, 2012's "Dark Roots Of Earth", and worked with bands like HATEBREED, SOULFLY and KATAKLYSM in the past.