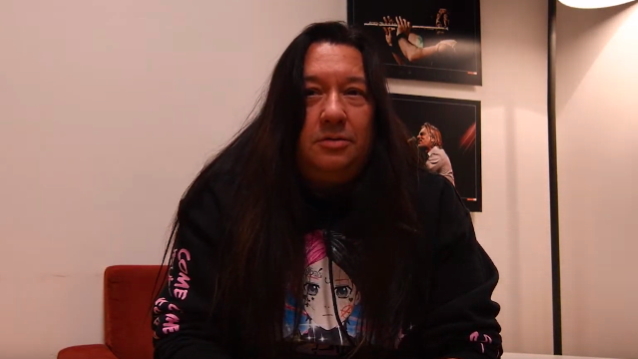 In a brand new interview with HeavyMetal.dk, TESTAMENT guitarist Eric Peterson was asked why it took the band nearly four years to release the follow-up to 2016's "Brotherhood Of The Snake" album. He responded: "In between touring — we go to Europe, like, three times; we'll do the States twice; we'll go to Japan; we'll go to South America — that's, like, two or three years or touring. And then when you get home, it's, like, 'Okay, let's write.' But a lot of times, Alex [Skolnick, guitar] and Gene [Hoglan, drums] and Steve [DiGiorgio, bass], those guys are busy doing other projects. And then when I come home, me and Chuck [Billy, vocals] are, like, 'Okay, what are we gonna do? Let's start.' So we start working on stuff. But it takes probably six months just to get started. 'Cause there's some stuff, we'll listen to it and [go], 'Ehhh, whatever.' It's kind of, like, not that cool. And then, all of a sudden, something will click, and then once it clicks, it happens real quick. But it always takes a long time for something to click. Once it clicks, it's, like — I don't know — three or four or five months that we're in the studio. And then it takes two months to record it. Then the label needs three months to set it up. Maybe not so much now, because they're not focusing so much on product; it's more streaming kind of stuff. Everything's changing with the music industry right now."

Peterson went on to discuss the changes in the way fans consume music in the streaming era and how it has affected rock and metal artists like TESTAMENT.

"People used to look at your record sales," he said. "And if you look at everybody's record sales, everybody sucks. Even bands that [previously sold] platinum, they're doing, like, two hundred, three hundred thousand records. But if you look at their streaming, their streaming is in the millions. And I think the music industry is adapting to that. That's what a band's worth now — what their streaming is. That's weird, but it makes sense, 'cause that's where most people are getting their information from.

"What's cool about metal is people still buy records, especially vinyl — special editions and whatever," he continued. "But as far as CDs and going to a store and buying a CD — they're gone. At least in the States, people don't go to stores and look through CDs. There's no stores anymore. It sucks. I hate it. When I was a kid, I'd go to the store… It was almost like a skateboard shop — it's somewhere you wanted to hang out, because they had all the magazines, they had all the t-shirts. I would stand there for hours, just looking through records and what shirt I wanted to buy. Now it's online. It's not metal. [Laughs] I just got the new MAYHEM record off Amazon. I couldn't find it in the shops. It took me, like, three months for me to get it in the mail. And I got it in the mail right before I went on tour."

TESTAMENT's new album, "Titans Of Creation", will be released on April 3 via Nuclear Blast. The long-awaited follow-up to 2016 album "Brotherhood Of The Snake" was produced by singer Chuck Billy and guitarist Eric Peterson while Juan Urteaga of Trident Studios handled co-producing, recording and engineering. Andy Sneap was responsible for the mixing and mastering of the album. Eliran Kantor stepped up once again to create a new masterpiece of artwork for the cover of this release.

TESTAMENT is taking part in "The Bay Strikes Back 2020" European tour, which kicked off on February 6 at Amager Bio in Copenhagen, Denmark. The trek, which also features EXODUS and DEATH ANGEL, will hit 25 cities before concluding on March 11 in Hannover, Germany.