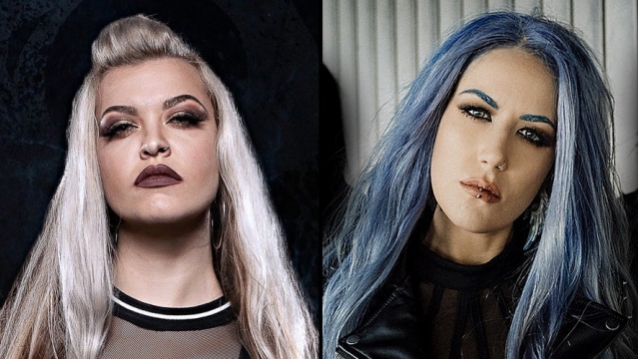 THE AGONIST's VICKY PSARAKIS Stands By Her Comments About ALISSA WHITE-GLUZ: 'I Have Nothing To Apologize For'

THE AGONIST singer Vicky Psarakis says that she has "nothing to apologize for," three months after she accused the the band's former frontwoman, Alissa White-Gluz, of trying to prevent the release of THE AGONIST's latest album.

This past September, Psarakis gave an interview to Rock Confidential in which she claimed that Alissa had been trying to hold THE AGONIST back. "In the beginning, she was doing it a lot through interviews and just talking very badly about the bandmembers," she said. "That is super awkward for me, because this is a person I've never met in my life, so it's weird for me to be talking about it. There's no knowing how far and to what extent her reach could be to hold this band back. I definitely know some stuff that she's done and other things are just speculation. So, I don't wanna throw that out there, but I will say that she has been trying to kill this band ever since she was fired."

A couple of weeks later, Alissa, who has fronted ARCH ENEMY for the past five and a half years, responded to Vicky's comments, calling her claims "completely untrue, false and unsubstantiated" and saying that she has not talked about her former band "or even thought about them in years." She also said that would be "more than happy to talk to Vicky and put her concerns to rest because I know for a fact they are completely untrue."

Psarakis addressed her issues with White-Gluz during a recent interview with Germany's Grasser Production. Asked if there has been any further contact between her and her predecessor since the media reported her initial comments, Vicky responded (see video below): "No. Everything that has been in the media, and when it keeps happening, Blabbermouth will still pick up something Danny [Marino, THE AGONIST guitarist] said in an interview a year ago, and they'll post it now as if it's recent. That's just, like, clickbait… 'Cause web sites are doing their job; they wanna make money.

"There hasn't been anything since then," she continued. "There's been no communication of any sort or [Alissa's camp] trying to communicate with us, actually. All I know is I said what I said. I stayed true to what I said. I didn't lie. I have nothing to apologize for or anything like that. From that point on, there's nothing really negative or — for myself… If fences were to be mended and we could talk and play a show together, or whatever, that would be nice. But if it doesn't happen, that's also okay… I mean, obviously, that's not in our control, and I really don't think it would ever happen. But, like I said, for myself — I think I'm kind of the outsider, too, because they have bad blood between them. Alissa with the guys, they were in a band together for 10 years — blah blah blah. I came in after the fact, so I really have nothing against anyone. So I'm okay with everything. Whatever is gonna happen will happen.

"All these things, I think, they're petty sometimes," Vicky added. "In five years that I've been in the band, I said one thing in one interview, and it got blown out of propotion. But all the other times in interviews I would be asked, I would not say anything, because I didn't want to pull the focus into that; it should be more about the music. And obviously, I'm a human being. After five years, it was the album release. I had scheduled interviews every single day one after another. I was just, like, 'You know what? Let me open my mouth and just speak up a little bit.' And it's only natural. And now that it's done, it's perfectly okay, and it's in the past."

White-Gluz was announced as the new singer of ARCH ENEMY on March 17, 2014. That same day, THE AGONIST revealed that they had recruited Psarakis as Alissa's replacement, saying in a statement that they wished White-Gluz "all the best with ARCH ENEMY and her future endeavors." A day later, Alissa released her own statement in which she claimed that she "had every intention of (and had even started) writing and recording yet another killer album [with THE AGONIST] this year," but explained that her "former bandmates decided to choose a different path." She also said that "the unfortunate decision" to part ways "was made beyond [her] control" and added that she would "always be proud of the three albums [she and THE AGONIST] created since 2005."

Alissa, who co-founded THE AGONIST in 2004 (then known as TEMPEST),had been largely quiet about the circumstances that led to her departure from the band, choosing instead to focus on the touring activities in support of ARCH ENEMY's 2014 album "War Eternal", which marked her recording debut with the latter group. But during an appearance on HATEBREED frontman Jamey Jasta's official podcast, "The Jasta Show", Alissa aired her side of THE AGONIST split for the first time, saying that she "never in a million fucking years" suspected that she would get kicked out of her own band. She added, "I don't agree with what they did. I don't have respect for what they did," and vowed to never mend fences with her former bandmates. "I'll never talk to them again — ever!" she said. "That was the worst betrayal I've ever felt in my life. They stole a lot from me. It was not right."

Marino later responded to Alissa's comments, claiming that "she was playing both sides to have her cake and eat it too" and accusing her of not "factoring in the other four lives in the band and their aspirations."