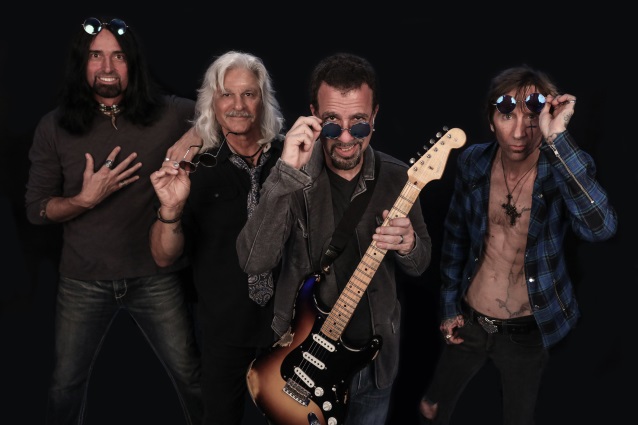 THE APOCALYPSE BLUES REVUE will release its new album, "The Shape Of Blues To Come", on July 20 via Provogue/Mascot Label Group.

The second single from the disc, "Open Spaces", can be streamed below.

Larkin discovered Cerbone at a biker bar. The singer had no idea that he was speaking to the drummer from GODSMACK; it was just a couple of guys hanging out. "It wasn't a recruitment at all," Larkin says. Just two guys who liked to ride, and enjoy music. "It wasn't like I was a guy in a big band, and he was starstruck at all. I went over to Ray's house with my wife to have dinner, and I happened to see his guitar sitting in the corner. I didn't know what he did, so I asked him to play a song, and I really loved his voice."

Grizzled "Rafer John" may be no spring chicken, but the truth is that this is his first band, though he has for years worked as an acoustic blues troubadour. He picks up the story. "Next thing you know, Shannon calls and says that he and Tony are down the road in a recording studio working on a blues song, and they needed someone to sing it," he recalled. "I said, 'Yeah, I know a few guys who could sing that for you, and he said, 'No. I want you to sing it!' I got in there, sang that song, and the rest is history."

This is more than a side project. "We're very excited about this second record," affirms Larkin. "I've never seen four wills join so strongly with one intent as I have in this band. That's something special."

Larkin tells of a pre-production meeting with producer Dave Fortman (GODSMACK, EVANESCENCE, ANTHRAX) at The Vibe Recording Studios in Southwest Florida (Fort Myers), in which the two settled into the control room, ingested certain mind-expanding compounds, and they then proceeded to listen to many hours of the records they loved the most. The phrase Larkin comes back to again and again are, "it has to be real, it has to be genuine." This record is exactly that. It drips with the existential stew of four guys playing together in a small room, in fact, that is exactly much of what we are hearing — the band laid the basic tracks in just one long day, but they captured it all with the cinematic vision and clarity of a great filmmaker.

Larkin continues: "Our mission is to see if APOCALYPSE can reshape the shape of blues to come. We're a different shade of blue. Our approach is to write and play as a traditional blues band. Our original influences came from [LED] ZEPPELIN, Johnny Winter, Stevie Ray Vaughan. We came to the blues later in life, and we've found our groove and sound, and it sounds unique and original to us. We don't try to hide our rock influences, it comes through creating a new shade of blue."

The band again wrote together for this record, but in a strange twist of coincidence, the tracks selected were all lyrically from the pen of Shannon Larkin. In terms of lyrical content, he reveals that his lyrics are often spiritual in nature, but he hesitates to define his meanings as he defers to the imaginations of the listener to find their own meanings.

Somewhere there is a kid who has been listening to GODSMACK, who will now come to know THE APOCALYPSE BLUE REVUE, and from this revelation of the blues they will back pedal to discover the long and honorably trod path that leads to Robert Johnson, the Kings (B.B., Albert, and Freddie), all the way forward to THE DOORS and the British blues rock boom, which finally leads straight to today.

Rombola provides the six-string fireworks with tight, tough riffs and incendiary solos, while Larkin brought a sheaf of lyrics that are straight ahead reflections of the biker's blues life. As close as they get to metal mythology is on the sultry, "Sincere", in which Cerbone intones, "Some say I worship the devil, I say he worships me." These songs are about walking the walk of life. Somewhere between Larkin's metal alter-ego and Cerbone's Americana roots there lies a place where passion, the roots of the blues, and the combined experience of everyone in the room work together to create a tantalizing path.

Sonically, "The Shape Of Blues To Come" covers a lot of ground, from the traditional blues changes of "Sincere" to the more cerebral textures found on the FLOYD-ian "What A Way To Go" with Rombolo's evocative late-night Strat tones, Larkin's soft, musical touch on the drums, sweet background choirs, and Cerbone's sung-spoken recitation of "What a way to go, when the wind's never at your back." "Open Spaces", which opens the album with a nod to Jimi's blues, then gradually ups the ante as the band's rock blood begins to boil and cast about with heavily flanged guitars and vocals is an ideal way to get a panoramic view of what is to come. The beauty lies in the fact that this band has been six years in the making, and while the album lies rooted in very traditional blues structures and sounds, Rombola, Larkin and Carpenter's rock roots do shine through. The album's closing number, "Noumenal Blues", finds Cerbone duet with Nancy Koerner, whose silky tones match Ray's earthy baritone alongside Carpenter's languidly loping bass line and some fingerpicked acoustic guitar before Larkin, Carpenter and Rombola put the record to sleep with a bit of unabashed rock.

There is a healthy dose of psychedelia that infuses the record, filtered through the blues of Jimi Hendrix, David Gilmour and Billy F. Gibbons, and guitarist Tony Rombola runs the gamut from earthy comping to explosive shards of metallic but no less bluesy slide guitar on "We Are One". Rombola's riffing, writing, and soloing is a beautiful blend of chops and taste. This is a great guitar record, and Rombola displays a lifetime of woodshedding, listening, learning, and his playing is a thrill from beginning to end. Another important piece of the puzzle here is the rhythm section of Larkin and Carpenter. Carpenter's huge, gritty tones are a perfect complement to the dynamic drum work, and together they have the feel and sound of a classic blues rock engine room.

"The Shape Of Blues To Come" track listing: 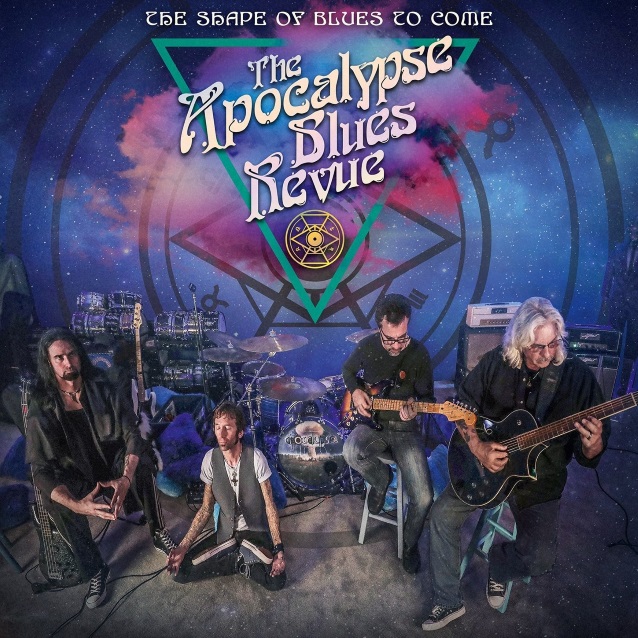