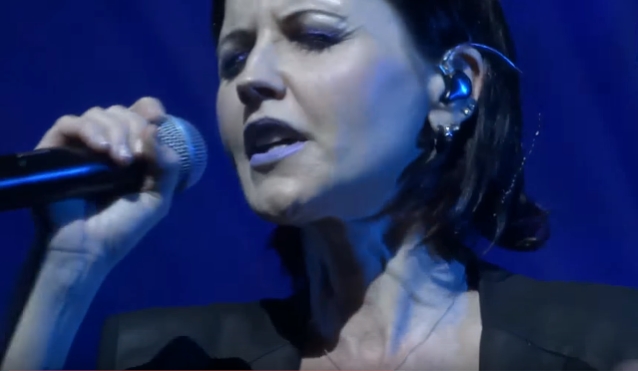 THE CRANBERRIES Singer Died By Drowning Due To Alcohol Intoxication

According to BBC News, THE CRANBERRIES frontwoman Dolores O'Riordan died by drowning due to alcohol intoxication.

An inquest at inner west London coroner's court heard that she had been drinking heavily before she was found dead in room 2005 of the Park Lane Hilton hotel in Park Lane, London in the morning of January 15. She was found by a maid the morning after she checked into the hotel. She was submerged face up in the bath, wearing a long-sleeved vest and pyjama bottoms. When paramedics arrived, police were performing CPR on her in the bathroom. At 9:16 a.m., she was declared dead.

Her alcohol level was 330mg per 100ml of blood, more than four times the legal limit for driving. There was also evidence of smoking and use of prescription drugs, including lorazepam.

O'Riordan died as a result of a "tragic accident," the coroner said.

She had no injuries or evidence of self harm and had struggled for many years with bipolar disorder and excessive drinking.

Earlier today, Dolores's THE CRANBERRIES bandmates released the following statement: "On January 15th 2018 we lost our dear friend and band mate Dolores O'Riordan. Today we continue to struggle to come to terms with what happened. Our heartfelt condolences go out to Dolores' children and her family and our thoughts are with them today. Dolores will live on eternally in her music. To see how much of a positive impact she had on people's lives has been a source of great comfort to us. We'd like to say thank you to all of our fans for the outpouring of messages and their continued support during this very difficult time. We request, please, for our privacy to be respected at this time."

O'Riordan was set to record her vocals on BAD WOLVES' cover of THE CRANBERRIES' most famous and successful song, "Zombie" the day that she died.

When BAD WOLVES turned in their album to record company Eleven Seven Music, CEO Allen Kovac, who managed THE CRANBERRIES for many years, immediately knew the version was special and sent it to O'Riordan. She connected with BAD WOLVES' performance and offered to add her own vocals to the track. The recording session was coordinated through Eleven Seven international managing director Dan Waite, a longtime friend of O'Riordan's, and the session was to take place on January 15 in London.

On January 15th 2018 we lost our dear friend and band mate Dolores O’Riordan. Today we continue to struggle to come to...

Posted by The Cranberries on Thursday, September 6, 2018