THE DAMNED THINGS, the supergroup comprised of members of EVERY TIME I DIE, ANTHRAX and FALL OUT BOY, will embark on a U.S. tour in May. Support on the trek will come from CROBOT and HE IS LEGEND.

THE DAMNED THINGS' sophomore album, "High Crimes", will be released on April 26 via Nuclear Blast.

The band recently confirmed the addition of ALKALINE TRIO bassist Dan Andriano to its ranks. He replaces Josh Newton (EVERY TIME I DIE),who hasn't been part of the group since it was reactivated three years ago. Also gone from THE DAMNED THINGS is guitarist Rob Caggiano (VOLBEAT, ANTHRAX).

"High Crimes" was produced by Jay Ruston (ANTHRAX, STONE SOUR, AMON AMARTH) and is the follow-up to 2010's "Ironiclast".

Trohman — who also plays in FALL OUT BOY — told Kerrang! magazine that the band was originally planning to release a new EP "but then it got to the point where we just made a whole record. The more we put into it, the more we were, like, 'Okay, let's just do this,'" he said. "I hate using the terms 'organically,' because it's a pretty shitty buzzword, but it happened organically. [Laughs]"

Trohman also spoke about some of the individual tracks on "High Crimes", saying: "I originally wanted to open the record with this song called 'Storm Charmer' because it was really slow and ominous, which is probably a bad idea. [Laughs] I think I love 'Cells' — that is one of my favorite songs on the record. 'Cells', 'Omen' and 'Carry A Brick' are some of my favorites.

"Honestly, I've been sitting with the demos for nearly two years, and I still haven't got sick of any of it," he continued. "I don't listen to it in a self-serving way. I'll listen to them and think, 'When am I going to hate them?' And every time I listen to them, I really like all these songs. It's the first time I've listened to a record and found there's not a lot I would change. With making anything, I could tweak it forever, but I think with this one, the mentality was just: go in, write these songs, and when they're done, they're done. Don't overthink anything. Hopefully, by approaching it in a 'Let's make them sound really cool and not tweak them forever' stance, then they would be the rawest possible version. I though the last record was definitely a little flippant in production, and I just wanted to pull back on that."

THE DAMNED THINGS was formed a decade ago, when FALL OUT BOY's Andy Hurley and ANTHRAX's Scott Ian started writing music together. The band played its first show two years later and released its debut album, "Ironiclast", in December 2010. After performing a few gigs together, the members took a hiatus and returned to their respective bands.

"Ironiclast" sold 6,200 copies in the first week of release and reached the No. 1 spot on Billboard's Heatseekers chart. 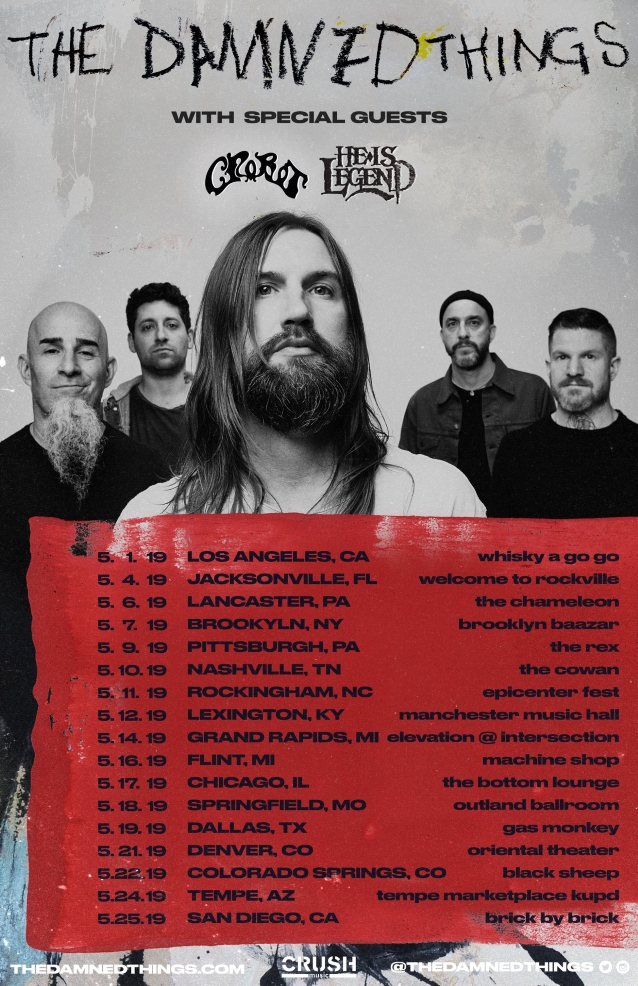