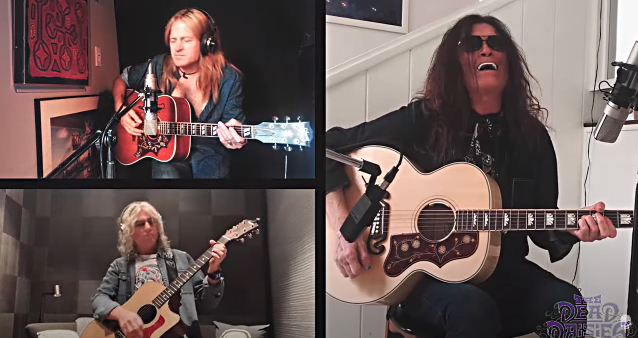 THE DEAD DAISIES Share Acoustic Version Of 'Unspoken' While In Quarantine

THE DEAD DAISIES members Glenn Hughes, Doug Aldrich and David Lowy have taken to social media to share an acoustic take on their latest single, "Unspoken", recorded from their respective homes while in quarantine. The original version of the track, which was made available earlier in the month, is taken from the band's fifth album, "Holy Ground", due later in the year via Spinefarm Records — the home of hard rock and metal within the Universal Music Group.

"Holy Ground" was recorded at La Fabrique Studios in the south of France with producer Ben Grosse. The follow-up to 2018's "Burn It Down", will be the band's first to feature Hughes (DEEP PURPLE, BLACK COUNTRY COMMUNION),who joined the group last year as its new bassist and vocalist, replacing John Corabi (MÖTLEY CRÜE) and Marco Mendoza (THIN LIZZY).

"Unspoken" was written during THE DEAD DAISIES' first studio session last summer. Glenn recalls: "I wrote the chorus while driving into Hollywood. I pulled over, turned on my iPhone and recorded the chorus. I transported myself back to 1972 just for a moment. The intro is the theme of the song. It's bombastic, primeval and haunting. This song is about letting go, getting past the fear, and to breathe again."

In an interview with "The Blairing Out With Eric Blair Show" at this past January's NAMM convention in Anaheim, California, Hughes spoke about how he came to be involved with THE DEAD DAISIES. He said: "They wanted someone in, and they were asking me about a year ago if I would be interested in doing this. And I've been doing the 'Glenn Hughes Performs Classic Deep Purple' [shows] for a couple of years, and I thought it would be appropriate for me to take a break from that and do something other than [that]. And I got together with the guys and we had a play. I've known Doug a long time, as you know. And it just fell together beautifully. It's a beautiful piece of music. I can't wait for people to hear it."

Asked what the new DEAD DAISIES material sounds like, Glenn said: "It's classic rock and it's a groovy album. It's got a lot of melodies to it. It's what you can imagine with me joining them — what could have happened and what has happened. It's a very interesting piece of music."