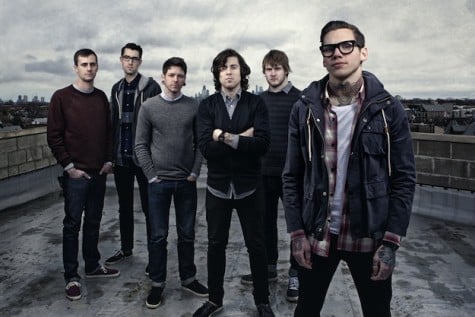 "Dead & Alive" was filmed and recorded last year during THE DEVIL WEARS PRADA's hugely successful "Dead Throne Tour: North America" tour. The collection includes performances of songs spanning THE DEVIL WEARS PRADA's career, including "Dead Throne"'s "Born To Lose", "Mammoth" and "Kansas", among others, as well as other notable fan favorites, including "Danger: Wildman", "Assistant To The Regional Manager" and "Outnumbered". "Dead & Alive" also features a wide array of behind-the-scenes footage shot and edited by the band's own Jeremy DePoyster. Highlights include exclusive backstage glimpses of THE DEVIL WEARS PRADA in action from the studio to the stage, unveiling the day-to-day reality of the on the road.

"As folks can continually expect from the band, we've been meticulous as ever picking apart edits, audio, artwork, bonus material, etc; which is very important to us — to be hands on, in control, and enthusiastic about the content we create for this band," says vocalist Mike Hranica. "It's always what we try and do with THE DEVIL WEARS PRADA and I think 'Dead & Alive' can serve as a testimony to that."

THE DEVIL WEARS PRADA are heralding "Dead & Alive" with their new live video, "Vengeance". The explosive clip — which recently had its world premiere on FEARnet TV — can be seen below.

Regarded as one of modern metal's most electrifying live outfits, THE DEVIL WEARS PRADA will spend its summer as one of the main stage headliners traveling the U.S. with the all-star Rockstar Energy Drink Mayhem Festival, set to get underway June 30 at the San Manuel Amphitheater in San Bernardino, California. Tickets to the much-anticipated tour — which also features SLIPKNOT, SLAYER, ANTHRAX, and the one and only MOTÖRHEAD — are on sale now. THE DEVIL WEARS PRADA has also slated a number of additional headline shows and festival appearances.