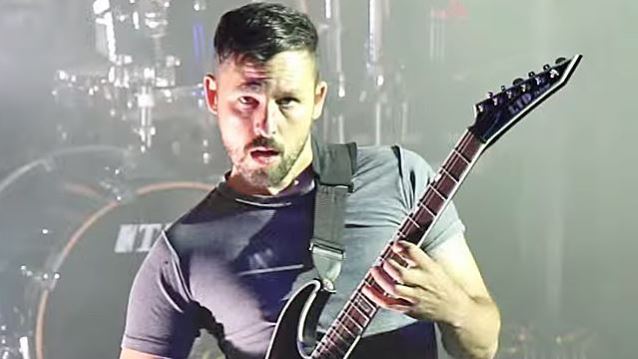 THE DILLINGER ESCAPE PLAN To Enter Studio In November

THE DILLINGER ESCAPE PLAN will enter the studio "around November" to begin recording the follow-up to 2013's "One Of Us Is The Killer" for a tentative early 2016 release. Asked by Australia's The Rockpit if he feels any pressure to outdo the band's last record, THE DILLINGER ESCAPE PLAN guitarist Ben Weinman said: "I don't think we really try to think about it too much. We just start moving and start making stuff. It's, like, just take what you've got and get to work, and at some point you've just got to write the first riff and not look back. We just want to make sure it always moves us, We're proud of pretty much every single thing we ever put out. We've always put 110 percent into it and we've always been the kind of band where some of our music may seem clever, but that's not the most important part. The most important part is that it has emotion and energy, so I like to think what differentiates us from some of the technical bands is that everything we do has to feel like it can't just be interesting, it actually has to move us. We have to be able to picture us playing it live and feeling it, and so the carthartic nature of our music is the most important thing. So, with that in mind, it's not about beating something or topping it, it's about maintaining that level of emotion and really feeling or believing that we're creating something honest. And that's the challenge — we have to be in the right state of mind to do it, we can't just force it."

Regarding the songwriting process for the next THE DILLINGER ESCAPE PLAN album, Weinman said: "It's not that collaborative, I've pretty much been the main songwriter from day one, and I'm the only original member in the band, so it's great to have some of these guys add their perspective and their flavor to it, but still have the consistency of the original vision that went into the band. I think that makes it interesting. Typically, myself and our drummer work and create pretty complex demos before anyone else hears it, and then we send it to the guys and they work on it, work on their parts, and it's really cool, especially, to hear Greg [Puciato], our singer, come back and hear his take on it. I think the good thing about him not being part of the process until it's almost done is that he hears it like a fan; it hits him exactly how we intended it to hit somebody. To be able to be moved by it and create based on that inspiration and influence, and I hear it back almost fresh, where it's got a whole new level and layer to it, it's a pretty exciting process, to be honest with you."

THE DILLINGER ESCAPE PLAN last year collaborated with rapper Jarren Benton on a song called "Rage" as part of the Converse CONS EP series, where artists who might not ever cross musical paths are invited to step into Converse Rubber Tracks studios and mix it up.

THE DILLINGER ESCAPE PLAN's fifth full-length album, "One Of Us Is The Killer", sold around 15,000 copies in the United States in its first week of release to debut at position No. 25 on The Billboard 200 chart. The CD was released on May 14, 2013 through the band's own Party Smasher Inc., in partnership with Sumerian Records in North America. Party Smasher's partnership with BMG covers the rest of the world, including licensing deals with Grind House for Japan and Remote Control in Australia.