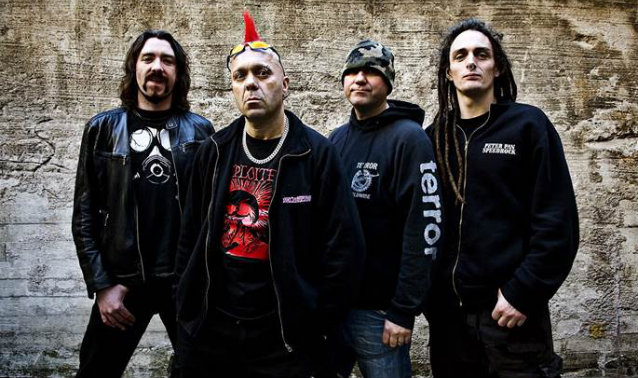 Nuclear Blast Records has announced the signing of British punk legends THE EXPLOITED.

Founded in 1980 in East Kilbride, Scottland by Wattie Buchan, the band is working on its new album for a late 2014 release.

Comments Wattie: "At last, after giving my word four years ago that we would sign to Nuclear Blast, it's now official!

"For us, it's a big deal to be signing to the biggest indie record company in Europe.

"One of the main reasons we signed to them is the fact that Markus [Staiger], the owner, is a big EXPLOITED fan and I know he will give us 100% backing to make the next album as great as the last ones."

"In my youth, I listened to hardcore and punk almost exclusively and THE EXPLOITED have been one of my absolute favorites ever since. Records like 'Punks Not Dead', 'Troops Of Tomorrow' and later on also 'Beat The Bastards' and 'Fuck The System' have been on heavy rotation constantly.

"The shows of this band have always been and still are a very special experience. Honest, hard and snotty — just like punk should be.

"A true highlight for me, of course, was their performance at the Nuclear Blast HQs on my birthday in 2013. After that, the deal has been set via handshakes and we've been celebrating 'till the break of dawn!

Nuclear Blast Records will re-release several THE EXPLITED classics on March 14 (March 18 in the U.S.). The will include great bonus material and will be made available as CD digipaks and on gatefold vinyl.