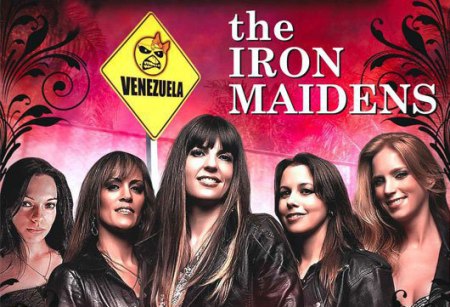 THE IRON MAIDENS, the world's only female tribute to the legendary band IRON MAIDEN, recently returned from its South American debut tour where they not only helped break ticket sales records but made music history as well. Selling 6,000 tickets in the first 12 hours for the Gillmanfest-Barquismetal 2011 Venezuelan festival, they "beat out previous ticket sales title holders METALLICA, who held the record at 5,000 tickets sold in two days," according to a press release. THE IRON MAIDENS also made music history by being the first and only all female metal band to perform on Venezuelan soil. Twice during THE IRON MAIDENS performance festival promoters stopped their set because the crowd of 40,000-plus concertgoers broke through the security lines. Finishing off the festival night, THE IRON MAIDENS joined former JUDAS PRIEST/ICED EARTH and current YNGWIE MALMSTEEN frontman Tim "Ripper" Owens, on stage for two songs, "Breaking The Law" (JUDAS PRIEST; see video below) and "Flight Of Icarus" (IRON MAIDEN).