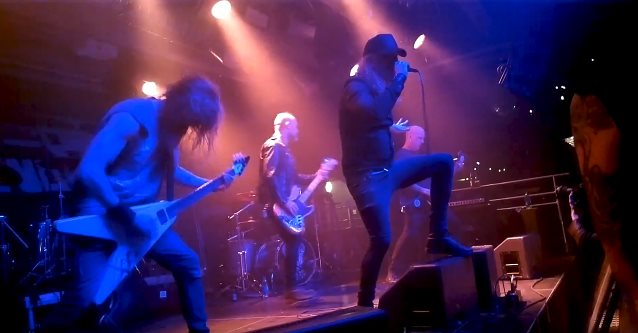 THE LURKING FEAR Feat. AT THE GATES Members: Video Of Stockholm Concert

Fan-filmed video footage of the Swedish death metal supergroup THE LURKING FEAR performing on October 14 at Kraken in Stockholm, Sweden can be seen below.

THE LURKING FEAR releases its debut album, "Out Of The Voiceless Grave", on August 11 via Century Media. Recorded at Welfare Sounds in Gothenburg, Sweden, the disc was made available as special-edition digipak CD, gatefold LP on 180-gram vinyl with a poster and as a digital download.

Featuring current and former members of illustrious and influential acts like AT THE GATES, THE HAUNTED, SKITSYSTEM, DISFEAR and GOD MACABRE, THE LURKING FEAR is not just another retro all-star project, but a real band of five death metallers who organically got together in order to celebrate the metal breed closest to their roots as well as their hearts.