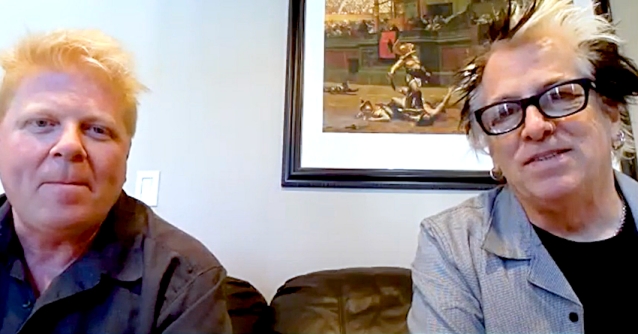 THE OFFSPRING singer Bryan "Dexter" Holland and guitarist Kevin "Noodles" Wasserman spoke to Lou Brutus of HardDrive Radio about the band's upcoming tenth studio album, "Let The Bad Times Roll", which will arrive on April 16 via Concord Records. The follow-up to 2012's "Days Go By" was produced by Bob Rock, who also worked on the band's last two LPs.

Speaking about the inspiration for the "Let The Bad Times Roll" album title, Dexter said (as transcribed by BLABBERMOUTH.NET): "We had a song two albums ago [on 2008's 'Rise And Fall, Rage And Grace'] called 'Shit Is Fucked Up'. We wrote that 'cause we thought how terrible things were in the world back then. But it actually got worse. So we had to come up with a new title, 'Let The Bad Times Roll'.

Added Noodles: "But really, it's not just an American-centric thing either, cause you're seeing stuff happening around the world. There's unrest happening literally everywhere — on all continents. You're seeing unrest, and then you're also seeing anti-democratic forces kind of taking power in some places, in which case causes more unrest. So, yeah, the whole world is a little bit of a scary place right now."

Dexter continued: "That's right. Climate change, climate deniers, vaccine, anti-vaxxers — whatever you want, it's out there."

In December, THE OFFSPRING released the official music video for its Rock-produced cover version of "Christmas (Baby Please Come Home)", a rock song originally sung by Darlene Love and included on the 1963 seasonal compilation album "A Christmas Gift For You" from Phil Spector.

Last April, THE OFFSPRING jumped on the "Tiger King" bandwagon by recording a cover version of THE CLINTON JOHNSON BAND's "Here Kitty Kitty", a song made popular by Joe Schreibvogel — better known as Joe Exotic, the "Tiger King" — through the Netflix docuseries.

Two years ago, bassist Gregory "Greg K." Kriesel, who hasn't performed with THE OFFSPRING since 2018, filed a federal lawsuit against Noodles and Dexter alleging trademark infringement and breach of partnership agreement over the rights to THE OFFSPRING name. In response, Holland and Wasserman filed a cross-complaint, denying basically everything Kriesel alleged and asking the court to appoint "three disinterested appraisers to appraise the fair value" of Kriesel's shares of THE OFFSPRING.

THE OFFSPRING has sold more than 40 million albums worldwide, won countless awards, and has toured consistently, playing more than 500 shows in the last decade alone. Their music has had a lasting impact across film, television, and video games.