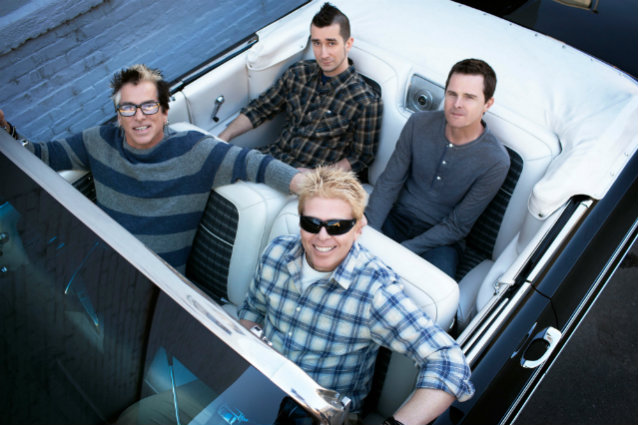 THE OFFSPRING To Release New Album In 2018

THE OFFSPRING is planning to release a new studio album in 2018.

Singer Dexter Holland and guitarist Kevin "Noodles" Wasserman spoke about the band's long-awaited follow-up to 2012's "Days Go By" during an interview at last month's Rock In Rio festival in Brazil.

Asked if it's true that THE OFFSPRING will make new music available in the not-too-distant future, Dexter said (see video below): "It is true! We're working on it." Noodles added: "We have been, yeah, for a while. We've got a few songs already done. We wanna do a couple more, and we definitely wanna get something out soon. Our fans have waited long enough, I think, so we wanna get something in their hands that they can listen to and hold and put in their ears."

As for a possible release date for the next THE OFFSPRING record, Dexter said: "2018, for sure!"

THE OFFSPRING issued its ninth album, "Days Gone By", five years ago. It spent 2014 on the road promoting the twentieth anniversary of its breakout album, "Smash", by performing the disc in its entirety at a number of shows.

In April, THE OFFSPRING played its 1992 album "Ignition" in full at a benefit show in Berkeley, California, to celebrate the thirtieth anniversary of 924 Gilman, a nonprofit music and art community space.

Earlier in the year, Noodles told the Phoenix New Times that THE OFFSPRING has "been really lucky" in that the band has "had a bunch of success" and is able to do what they love to do despite a steep decline in recorded-music sales in the last few years. He said: "We don't have to get day jobs. [Laughs] I hate when I see one of my fave bands, like someone that's super-influential and consistently making good music, and they have to get day jobs and can’t just do their music. And that's unfortunate. So when bands that are heroes of mine… to see them struggle and deal with the Internet and piracy, it's a problem. We personally benefit from the Internet being relatively a free exchange of ideas. It's mixed feelings; gotta take good with the bad. I love I can get on Twitter and get feedback from fans immediately and share ideas. It's more positive for us."