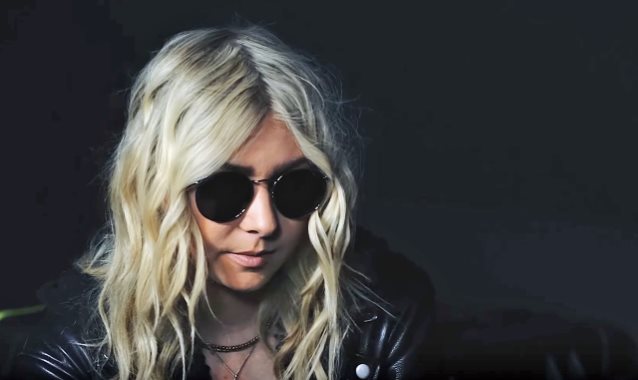 Sebastiano Mereu of From Hero To Zero recently conducted an interview with THE PRETTY RECKLESS singer Taylor Momsen. You can watch the full chat below. A few excerpts follow (transcribed by BLABBERMOUTH.NET).

On starting THE PRETTY RECKLESS in 2009:

Taylor: "For me, music is — I say a 'passion,' but it's more than a passion, it's my identity. I've been writing songs and singing and playing guitar since my birth. I've been humming melodies since I was a child, so it was something I always did. I was in different bands. When I met this band, when I met [guitarist] Ben [Phillips] first and we started writing together, there was a magic 'click' there. It wasn't really a choice. It was out of desperation, the need to play music."

On whether she was prepared to endure the rigors of the music industry:

Taylor: "It was basically a need. Music to me, is like air, it's water, I'm desperate for it. I feel the need to create and if I go too long without doing it, I start to lose my center. It was never really a choice; it was more out of desperation of needing to do it. There was no forethought, it was just go, blindly, write, create, put it out, and if people like it, cool, if they don't, I like it, so I'm happy. [Laughs]"

On how she perceives the state of the music industry:

Taylor: "I don't know if it's better, but it's changing rapidly still. I don't think the music business itself has actually wrapped their own heads around with how quickly technology is progressing. Now it's all about streaming, it's not about record sales. I think currently, music is cyclical. Right now, it's like being in the '50s again where it's all single-based and the album is slowly disappearing, which is sad to me. I love the album. To me, it's not about one song. You can't capture everything in one song. It's about the whole piece of work, the whole body of work. That's not really how music is viewed nowadays. It's going through a transitory state right now, like the world. It always comes back. Music is, like I said, it's like water, it's like food, it's a necessity, a universal language that everyone needs and can understand. There's the '50s singles, the '60s renaissance hit and all these fantastic musicians exploded into the scene. The '60s, '70s, and then in the '80s rock and roll turned a little cheesy and more into the pop genre again, then the '90s renaissance happened. We're waiting for the next '90s right now. [Laughs]"

On recording the band's new album "Who You Selling For" in analog:

Taylor: "This was the first record that we, on our previous records, it was just the four of us. We all played multiple instruments, so we'd overdubbed another guitar. Ben would play two different guitars, and this time we brought in outside musicians to really capture that organic moment and see where the song would take you. If it didn't work that day, we just left the studio and we'd come back the next day and try again. There was no forcing it. That was something we really tried to aim for. This record, I think, was the first stepping stone to what the next record will be of that process."

On whether music consumers expect digital perfection on albums:

Taylor: "I'm sure it is expected, but to me, doesn't it all sound the fucking same? [Laughs] Are you bored yet with lined-up guitar solos and everyone's voice sounds the same when put through the machine? There's no human element to it, so how can you connect? The reason that music is such a lifeline of humanity is that you can hear the person behind the note. You can hear the pain, you can hear the struggle, you can hear the striving to accomplish something greater than yourself. With everything being so digitally manipulated, I feel you lose so much of that. I think it's sad. There's a reason you actually had to be great in those renaissances that I'm talking about. Those bands were great. They didn't have any tools at their disposal to change them. They actually had to be that good. That's our goal is to just constantly better ourselves and be as good as humanly possible."

On whether she uses backing tracks while playing live:

Taylor: "No. Also, because it's boring. We're just not that band. We can't even play a click track. What, do you want to hear tic, tic, tic, tic, tic in your head all night? It's awful. You can't feel the music that way. Our drummer [Jamie Perkins] has a Roland pad, so if you hear any sort of sound effect or noise, but he's playing that. It's programmed into a [module], but if he doesn't play it like a drummer, it's not going to happen. It's not coming out of the computer."

"Who You Selling For" came out last October. The disc was produced by THE PRETTY RECKLESS's longtime collaborator Kato Khandwala.

THE PRETTY RECKLESS will continue to tour throughout the year in support of the album, hitting major markets and festival shows, including Rock On The Range, Carolina Rebellion and Rocklahoma in the U.S. as well as playing European and South American dates.