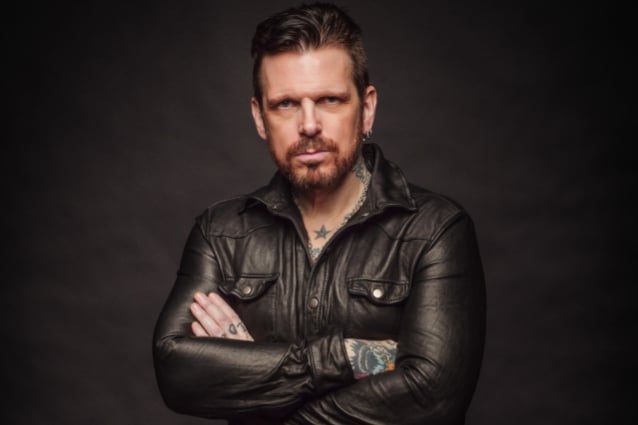 Ricky Warwick has paid tribute to Philomena Lynott, mother of the late THIN LIZZY frontman Phil Lynott, who died earlier this week at the age of 88. She was battling cancer in recent years.

Warwick, who has fronted THIN LIZZY since 2009, told SiriusXM's "Trunk Nation" on Wednesday (June 12): "She was a fantastic, wonderful woman — a real beacon of light; very positive energy; very graceful.

"I had the pleasure of meeting her on a couple of occasions," he continued. "The first one was the first time that THIN LIZZY played Dublin with me fronting the band. Way back in 2011, we played a beautiful theater there called the Olympia Theatre, an old Victorian theater. And Philomena came to the show. So I was nervous enough anyway, but the fact that I knew Philomena was gonna be there, I was beside myself with nerves. And during the show, I could see her — she was in the corner of my eye; she was in one of the VIP boxes off to my left. And I just couldn't bring myself to look at her, 'cause I was thinking, 'What must she be thinking? What's going through her mind? Never mind what's going through mine.' And we finished the set with 'Black Rose', and I glanced up. And the show had been phenomenal, and she was on her feet with a huge grin on her face, crying her eyes out. And after the show, we went to the after-show and she was sitting down, and she waved me over. So I took a deep breath and thought, 'Okay. Here it goes.' And I walked over to her. She stood up and gave me the biggest hug. And she was so gracious and nice in what she said to me. She just said to me, 'My Philip would have absolutely loved every minute of this, hearing his songs played with such soul and such love.' And I think I burst into tears. It was all the validation that I think I ever needed — to hear it from Phil's mom, to say those words to me. And she didn't have to say anything, she didn't have to wave me over, but she did, and she was so gracious and such a fantastic woman. And I'll never forget that moment."

THIN LIZZY has several shows scheduled for this summer starting on July 28 at the Steelhouse festival in Wales. The band will also play the U.K.'s Rewind North event on August 4, Spain's Leyendas Del Rock festival on August 8 and Belgium's Alcatraz on August 10.