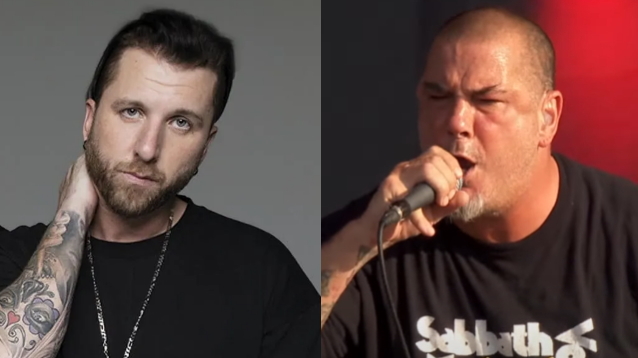 Sanderson discussed his views on the PANTERA comeback in a new interview with RadioactiveMike Z, host of the 96.7 KCAL-FM radio program "Wired In The Empire". Asked what he thinks about Anselmo and Brown touring again under the PANTERA name, Neil said (as transcribed by BLABBERMOUTH.NET): "Even within my camp, there are some massive PANTERA fans. I think Zakk Wylde was the obvious choice for the job. And it will be what it is.

"I saw PANTERA back when they opened for BLACK… It was actually one of the coolest shows I've ever been to — it was BLACK SABBATH, PANTERA and the DEFTONES in Toronto," he recalled. "That's the last time I saw PANTERA. It was pretty awesome.

Asked if he would get behind the drums and play for PANTERA if he was approached to jam with Anselmo and Brown, Neil said: "[Laughs] I would have to really sit down… Vinnie Paul, he was such the king of groove, so, yeah, they're pretty big shoes to fill [laughs], let me say that.

"THREE DAYS GRACE, I do play double kick, but I'll never be in SLAYER, let's put it that way. [Laughs]"