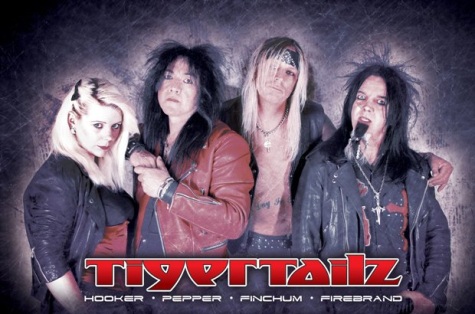 Commented the band: "It's with a heavy heart that we have to inform you that we've decided to part company with Sarah.

"The last thing the band needed right now was another lineup change... But, unfortunately, as a band we're just not functioning and a change was needed to move forward. It's unfortunate, but keeping a band going year-on-year isn't easy and sometimes difficult decisions have to be made.

"We would like to thank Sarah for all she's done and wish her all the best for the future.

"Our priority is the longevity of TIGERTAILZ and to raise as much money as possible for the Amser Justin Time charity, which helps people suffering from pancreatic cancer. With this in mind, we'll be announcing a new bass player as soon as possible and resuming touring duties.

"Thanks to you all for your fantastic support and let's keep the faith."

TIGERTAILZ last year announced the return of drummer Ace Finchum to the band. The addition of Ace, who last played with TIGERTAILZ in the early 1990s, reunites all surviving members of the group's "classic" lineup.

Shooting to fame in 1990 on the back of big-selling second album "Bezerk" and a string of hit singles, magazine covers and videos, the band won all the plaudits going for their bombastic, lion-hearted rock anthems — songs that are still played and loved all over the world today.

Getting back together in 2005, they were struck by tragedy when bassist and co-founder Pepsi Tate died from cancer in 2007. Fighting back with the usual 'TAILZ spirit, the band regrouped with bass player Sarah Firebrand and drummer Robin Guy in 2010, and headlined the opening night of the U.K.'s Hard Rock Hell, a performance that sold out months in advance.