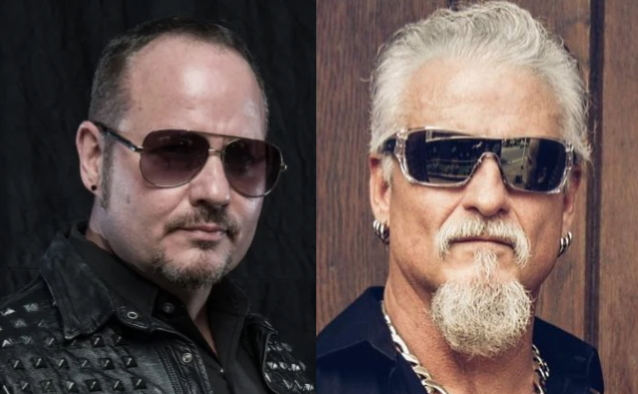 Former ICED EARTH singer Tim "Ripper" Owens says that Jon Schaffer will "pay the price forever" for his role in the January 6 riot at the U.S. Capitol.

Owens, who joined ICED EARTH in 2003 and stayed in the group for four years before being fired in December 2007, addressed his time with the band in a new interview with Jeff Gaudiosi of MisplacedStraws.com.

Asked if he has had any contact with Schaffer in the months since the ICED EARTH leader was arrested for participating in the Capitol riot, Owens said: "I didn't have contact [with him] before [he was arrested]. It's funny, everybody comes out of the woodwork and said, 'Tim's just like Jon,' and blah blah blah. It's, like, listen, he kicked me out of the band five days before Christmas. I don't hate the guy, but it's not like we talked [in the years that followed]. Jon messed up and he'll pay the price.

"Everybody knows my belief on riots that are still going on in Portland and all over America all the time that everybody still seems to think are fine," Owens, who frequently "likes" tweets that amplify Republican talking points and that are derogatory to Democrats, continued, apparently referencing the Fox News–propelled narrative that downtown Portland is on permanent fire. "Any time you break the law and you riot or have an un-peaceful protest, it's wrong. I don't care who you are and what you are, it's wrong.

"It's funny how we still talk about January 6th all the time, but we don't talk about everything that's still going on in America non-stop," Tim continued. "Portland's a fucking train wreck; they took over city blocks and we act like it's fine. It's all wrong. And Jon was wrong, like everybody else is. He's just as wrong as the people burning down mom-and-pop stores in Baltimore. They all put 'em in the same category. If you're breaking the law, you're breaking the law. That's what I look at. When anybody sticks up for any side, I think they're breaking the law.

"Listen, Jon could have stood outside and protested all he wanted," Owens added. "That's fine. Stand outside and protest all you want. Once you guys go inside and once you do things, you broke the law. And that's just the way it is. And Jon did something wrong, and he'll pay the price forever for it. But still, you know what? People are still buying his records, so he'll still get to have his big house and his cars. It's gonna be a little different."

In a 2012 interview with Australia's Loud, Owens said that his departure from ICED EARTH wasn't executed properly. 'It was handled poorly, I think, the situation," he said. "It could've been handled good and everybody could've looked good in the situation. But it was handled poorly, I think… I started getting all the blame when things weren't the same. Or things weren't what Jon thought they could be. And then, of course, it all came down on me. None of the blame ever came down on Jon. I'm fine with that, but the funny thing is that nothing really changed when I left anyway. I read numbers and I talk to agents, and the crowds are the same or smaller now. I think it was also me wandering a bit, knowing that ICED EARTH was kind of like a solo project. It's really Schaffer's band, and I knew that. And I started having my own: I started doing BEYOND FEAR, and pushing BEYOND FEAR when probably I should have been talking about ICED EARTH. I think Jon read a lot of that and he read into it that my heart and soul wasn't into ICED EARTH."