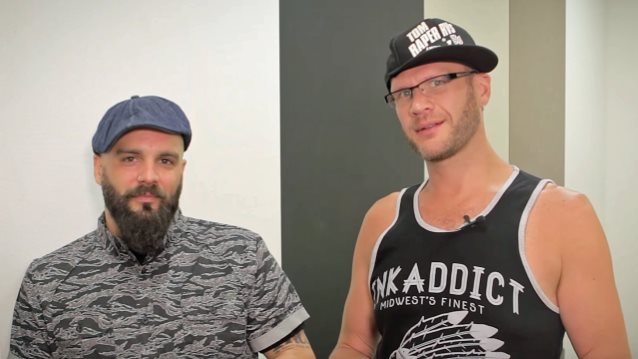 TIMES OF GRACE, the collaborative project featuring KILLSWITCH ENGAGE members Jesse Leach (vocals) and Adam Dutkiewicz (guitar),has entered Signature Sound studio in San Diego, California to begin recording material for its second album, tentatively due next year. Sitting behind the drum kit during the sessions is Dan Gluszak, who previously played drums for TIMES OF GRACE on tour and has since been named an official member of the band.

Leach said earlier in the year that TIMES OF GRACE's new material was "shaping up to be a whole different world of sound and words. I will be using different melodic registers and less growl substituted by more 'melodic yelling,'" he said. "The lyrics are primarily quite melancholy so far but most of my lyrics often do begin that way and find light as the process unfolds."

Dutkiewicz previously revealed that he had demoed more than a dozen tracks for the next TIMES OF GRACE album.

TIMES OF GRACE's debut album, "The Hymn Of A Broken Man", was released in January 2011 via Roadrunner Records. The CD sold around 10,000 copies in the United States in its first week of release to land at position No. 44 on The Billboard 200 chart.

Leach told Lithium Magazine last year that "the cool thing about TIMES OF GRACE is that it's another outlet for us, and moving forward with that project, it's gonna be even more different from KILLSWITCH. There's gonna be no quote-unquote metalcore sound going on. As a matter of fact, I'm planning on not doing much aggressive vocals at all."

Drums getting lad down for new music. Our tour drummer Dan Gluszak is now an official member and will be playing drums on the new record. Adam D is on the controls and the slow process of piecing together the behemoth of the new album begins...... . #Repost @holycrapzombies (@get_repost) ・・・ Trying my best to drum the hangover out of Adam D for the second day in a row now. Where u at @jesse_d_leach #TimesOfGrace #ItBegins #NewAlbum #Metal #Rock #Shoegaze #PostMetal #Blues #Progressive #Ambient #AdamD #JesseLeach #DanGluszak