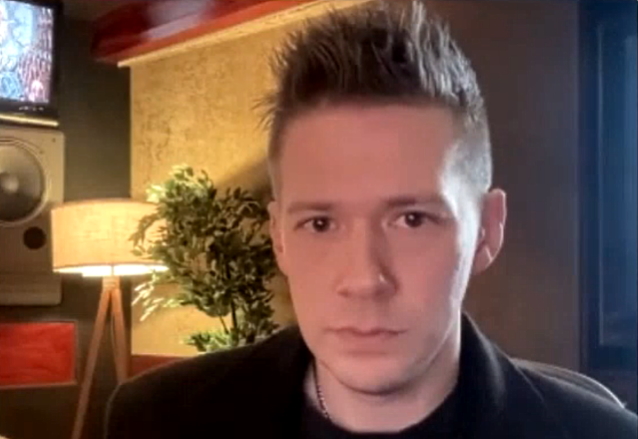 In a brand new interview with Jon Weigell of Rolling Stone's Twitch channel, GHOST leader Tobias Forge was asked if that is any music that he has been inspired by lately that he will try to incorporate into the upcoming follow-up to 2022's "Impera" album. He responded (as transcribed by BLABBERMOUTH.NET): "Nothing that I can commit to here and now. There are a lot of things in my head that I feel like I wanna explore writing.

"I think I've never really ended an album production, or left an album production, without feeling like there are things that I would wanna do different next time," he explained. "Kind of [the way I feel] about [GHOST's onstage] costumes — you try to… slowly and steadily you try to perfect, but for every process end up doing some of experiment that might have been a miracle, or the next time you're, like, 'Oh, let's never do that again.' Because recording and writing and just making a record is also… it's a boring thing, but there's a lot of practical factors that will play into the result of making a record. Historically, if we don't talk about my band, but just historic records, there's a big difference between recording in your hometown and recording a record on a tropical island someplace. And none of it is better than the other; it just means two different things. And people that you work with, and what state of mind you are in when you are doing it. And if you work nights or if you do work in the daytime. There are so many things like that.

"So right now I'm more about vibing — I'm trying to build a new vibe for writing this record now, just to sort of see to it that I don't end up repeating myself, and do something else," Forge added. "Evoke a few good things from the past and try to eradicate some of the things I didn't like. And once more, you try to do it perfectly. It's like being that sort of person that gets married for the sixth time: 'This time is gonna be great. It's gonna be perfect this time.'"

The winners of the American Music Award are all voted by fans. Nominees in 37 categories were selected based on key fan interactions through Billboard charts, including streaming, album and song sales, radio airplay, and tour grosses. These were tracked by Billboard and Luminate covering the eligibility period of September 24, 2021 to September 22, 2022.

Featuring the Rock Radio No. 1s "Call Me Little Sunshine" — recently nominated for a "Best Metal Performance" Grammy — and "Hunter's Moon" (the end credits song from 2021's No. 1 R-rated film "Halloween Kills") as well as the currently climbing "Spillways", "Impera" was released March 11, 2022 via Loma Vista Recordings. Hailed by Rolling Stone as "an escapist rock and roll album," "Impera" "conquered rock, metal and the charts" (as reported by the Los Angeles Times),debuting at No. 1 in a sweep of the U.S. album charts, and entering the Billboard 200 at No. 2. Produced by Klas Åhlund and mixed by Andy Wallace, "Impera" sets the most current and topical GHOST subject matter to date against a hypnotic and darkly colorful melodic backdrop, resulting in a listen like no other — yet unmistakably, quintessentially GHOST. "Impera"'s release has been supported by the "euphoric spectacle" (Rolling Stone) of the 70+ date "Imperatour" arena tour, during which the Wall Street Journal christened GHOST "the next generation of arena stars."