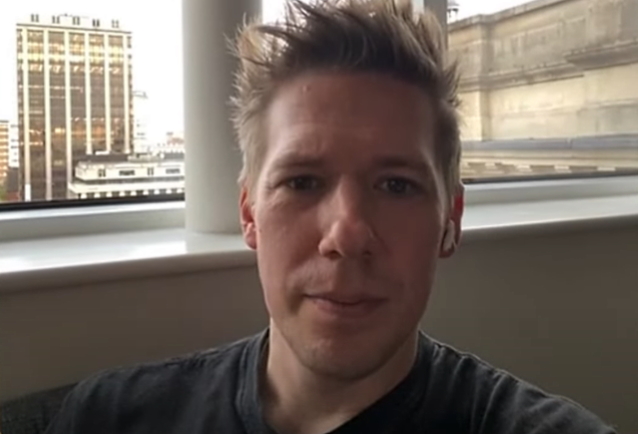 During a new appearance on "Drinks With Johnny", the Internet TV show hosted by AVENGED SEVENFOLD bassist Johnny Christ, GHOST leader Tobias Forge was asked how many "stage members" he has had in his band over the years. He responded (as transcribed by BLABBERMOUTH.NET): "How many stage members? I don't know exactly — 15 maybe. Something like that. But on the recordings, I've used the same drummer for most records — a guy named Ludvig Kennberg. But he's been drumming on the majority of the records — from the first one to the third one, fourth one, and one of the EPs and stuff in the middle — but never with us live. So that relationship is sort of one standalone thing that feels like… Whenever we get together and we're recording, it feels like a great… 'Here we are again.' That is sort of one thing, and then the live band has always been different."

Regarding how he goes about choosing the musicians for GHOST, Tobias said: "If we were to change anyone now, it would have most likely been on recommendation, because there's definitely a combination… Originally, I put a band together [which] was based more on proximity than ability or professionality. And that will end up being a problem if you're not very lucky and you sort of just end up being RUSH — three best friends ever just being the greatest band together as well. But that is not very common…

"Basically, what is very important for me nowadays, and I've been trying to do this for the most part… And to be clear, I obviously look to the band first, but to me, the crew is very much an extension of the band," he explained. "And just overall, I'm very, very picky when it comes to people and attitudes amongst the band and the crew so that we have a very sturdy, friendly, professional team for the most part. I mean, obviously, on a big tour like this where it's 40 people — our buses is about 40 people, even more so — and then we have two [other] bands with us, of course, amongst 50 [or] 60 people, I can't curate everyone. But I'm really, really trying to get people that aren't privy to bullying and screaming and being a fucking dick."

Back in 2017, Forge was sued by four former members of GHOST after being dismissed by the group's founder the previous December. They accused the singer of cheating them out of their rightful share of the profits from the band's album releases and world tours. The lawsuit was filed in the district court of Linköping, Sweden, where GHOST was originally based. It claimed that a partnership agreement existed between Forge and the four former members, all of whom performed anonymously in the band as Nameless Ghouls. As a result of the lawsuit, Forge was forced to reveal his identity after years of performing in a mask as Papa Emeritus. He has maintained that "no legal partnership" ever existed between him and the other members, that they were paid a fixed salary to perform as his backing band, and that they were essentially session musicians.

Forge later told The Pulse Of Radio that the lawsuit only inspired him to work harder at making GHOST a success. "I had a situation that urgently told me to salvage the situation and reclaim what is mine and also justify that it was mine to begin with," he said. "It's just growing pains, and all this has just been — it's the result of things going well, not the opposite."