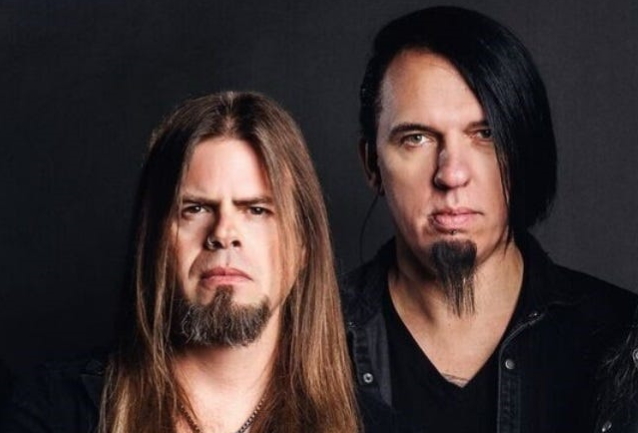 Nearly two months ago, QUEENSRŸCHE entered the studio to begin recording its new album for a tentative late 2022 release. Helming the effort once again is Chris "Zeuss" Harris, who previously worked with the band on 2015's "Condition Hüman" and 2019's "The Verdict" LPs.

In a new interview with The Metal Summit, QUEENSRŸCHE singer Todd La Torre, who played drums on "The Verdict", offered an update on the progress of the recording sessions for the new album. Asked if QUEENSRŸCHE's touring drummer of the past five years, Casey Grillo, played on the new effort, Todd said (as transcribed by BLABBERMOUTH.NET): "Casey recorded all the drums for the new QUEENSRŸCHE album. The drum sound is fucking ridiculous… They just sound so, so thunderous and real. I don't know, man. You'll hear it when the record's done, but it's funny, because sometimes people will be, like, 'Oh, that sounds replaced' or 'that's sampled,' and if you knew the time that was taken into miking the drums to get the perfect sound. It's, like, no, our drum sounds are the sounds that you would wanna replace your sounds with.

"Casey played the drums on the record," La Torre repeated. "He was a part of all of the songwriting, a very integral part of the entire process. And yeah, it sounds great. I've got one chorus left to finish and a little ending to one song, and then I'm done. All the bass is done, guitars — everything's done. I'm the last guy here to finish, and we start rehearsals in two days [for the upcoming tour with JUDAS PRIEST]. So, yeah, it's been really, really just grueling and grinding it out to get this deadline."

He continued: "You know what we did on this record… Every other time, each guy would kind of submit their own song ideas and then we would kind of work on that. But what we did on this record was, other than Eddie [Jackson, bass] — Eddie has a couple of songs that are really cool that he wrote and then showed us kind of when they were pretty much done. And then Michael [Wilton, guitar] kind of wrote some interesting chords — still staying within the keys and everything. But we all got in a room with our here [in Florida], and we literally started from scratch. Like, 'Michael, what do you got?' [And he would] come up with a riff. And Casey [Grillo] would sit on the drums, or I would sit on the drums. We were all actually in a room and just tried it like the good old days. So this record was totally like that — the whole thing pretty much, minus one or two songs. And even that changed a little bit."

In early 2021, Wilton told The Metal Voice about the new QUEENSRŸCHE material: "Our producer, Zeuss, if this is any indication, he says it sounds like QUEENSRŸCHE … I think we're just going with our gut right now. You don't wanna take too many drastic chances in this day and age. So I think it's more of a continuation of 'The Verdict', maybe, in some sense. We're riding that wave. It's been good to us. [Laughs]"

In early October, Rockenfield filed a lawsuit against the band's fellow original members Wilton and Jackson, alleging, among other things, breach of contract, breach of fiduciary duty and wrongful discharge.

QUEENSRŸCHE recently pulled out of SCORPIONS' rescheduled "Sin City Nights" Las Vegas residency in order to support JUDAS PRIEST on the "50 Heavy Metal Years" North American tour dates in March-April 2022. The tour will kick off on March 4 in Peoria, Illinois and conclude on April 13 in Hamilton, Ontario, Canada.