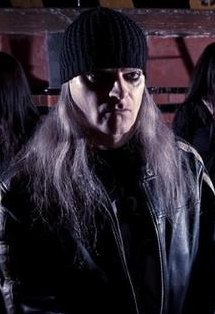 Impressions from "Antecedent Death I", the first solo exhibition of Tom Gabriel "Warrior" Fischer's (TRIPTYKON, CELTIC FROST) "Death Masks," held in Lausanne, Switzerland, February/March 2011, as part of the Swiss edition of the Inferno festival, can be found at this location.

Alternatively subject to passionate controversy or revered as one of the most influential and revolutionary musicians of the past two decades, Fischer's creative and intriguingly enigmatic mind has helped shape the face of modern extreme metal. But Fischer's imagination has never been limited solely to music: starting as early as 1983, he began to create the underground art which, for example, would subsequently grace HELLHAMMER's legendary "Triumph Of Death" demo, "Apocalyptic Raids" EP, or "Demon Entrails" album. Moreover, throughout CELTIC FROST's existence, Fischer has been closely involved with all aspects of the band's art direction and visual presentation.

For the very first time, Fischer's art outside of music is now commercially available directly from the artist himself. This web site features Fischer's continuing series of life-size death masks of himself as well as limited-edition signed prints of some of his most dramatic drawings.

Fischer casts each death mask individually by hand from a mold of his face made in New York by Josh Turi (special makeup effects artist),Tom Denier, Jr. (special makeup effects artist),and Eli Livingston (sculptor for, among others, HR Giger). The death masks are cast from concrete and then primed and painted by Fischer using oil, enamel, or acrylic paints. The finished death masks are mounted on anodized black aluminum frames and labeled, numbered, and signed by the artist. No two death masks are thus ever the same, each death mask is a unique and lasting piece of art.

Similarly, the limited edition, large-format prints of Fischer's drawings are also signed and numbered by the artist.