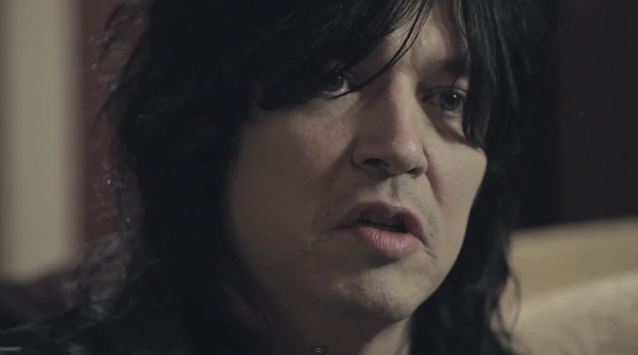 "Totally Driven Radio", the weekly radio podcast heard live every Thursday night from 8 p.m. to 11 p.m. EST time on the Totally Driven Entertainment Radio Network, recently conducted an interview with Tom Keifer, best known as the singer/songwriter/guitarist of the Philadelphia-based blues-rock band CINDERELLA. You can now listen to the chat below. (Note: Keifer calls in at the 93-minute mark and hangs out for over 20 minutes.)

Asked for his opinion on how the increased accessibility of music via the Internet in the last decade or so has affected the record industry, Keifer said: "It's killing the industry. You know, the gate's open, the horse is out. And it's sad. I think that as convenient as it is [to find music online], it's become too convenient. There's so many different ways to get music now that I think that it has become the accepted norm to not pay for it. I think most people, it's not, like, intentional, 'Hey, I'm gonna steal this.' It has seeped into the fabric of society slowly as becoming acceptable. Now there's technology where… I know people don't feel like they're doing anything wrong if they mark a song as their favorite on YouTube, 'cause it's, like, 'Well, I didn't download it.' That becomes people's record collections then; their favorites on YouTube are now… and that's kind of the new trend. Some of these streaming networks that do pay, but they pay so marginally, or so minimal, that it's just… And the people out there listening, they don't… It's more about education and letting them realize what it's doing to the industry. And, to me, the biggest bummer, or the thing that's really a drag about it is those lost revenues back into the industry that go back to the publishing companies and record companies, so much of that used to be used to develop new artists, and to stay with artists over multiple records. Like, we had the benefit of that back when we [CINDERELLA] were coming up. We had a major label that would stay with us through four studio albums and made sure we had the best producers, engineers, studios to make a really quality record. So that window of opportunity, I think, for an artist, more and more, is shrinking. It's one of the reasons I produced [my solo] record without a label involved, because I didn't wanna be subject to the very small artist budgets that they have now, which is, like, slim to nothing. So that's the saddest part to me, because ultimately that's gonna affect the art itself."

He continued: "It's crazy. [This becomes a factor] not only [in terms of] the lost revenue to the record companies that [would otherwise] go to developing artists and marketing artists and making sure that they're making quality records, not only that, but also now you've got these artists who come out [and they sell] 10,000 or 20,000 units, they're in the charts and they're considered a success and well know, and they can barely make a living. And everyone deserves to make a living at what they do. So it's kind of a crazy industry right now. I'll go even further to say that it's not just the music industry. The digital age and the age of the Internet has opened the door for piracy on software, movies, journalism, literature… So it's affecting major industries — not just the record industry. This is an even bigger picture in terms of society.

"You know, you're talking about everyone's concerned about the economy. Well, the industries that I just mentioned are all intellectual property-driven industries, and they're off by many, many dollars because of the digital age, and that all bleeds down into retail stores, trucking… I mean, the pyramid effect is huge on all those industries when the revenues are off. So it's a dangerous place we're in. It really is. I'm not just speaking for our industry. I mean, it's a big, big, bigger picture than that. Look at all the stores that have closed around your town. Just take a look around. Movie stores, record stores, bookstores… they're all going away. That's jobs not only in retail, but trucking to get the physical products to those stores. And people will argue, now you can get it online. Well, it takes a whole lot less people and manpower and industry to sell stuff off online. It just does. You're eliminating trucking, you're eliminating a lot of personnel and staff… You know. I'm just saying."