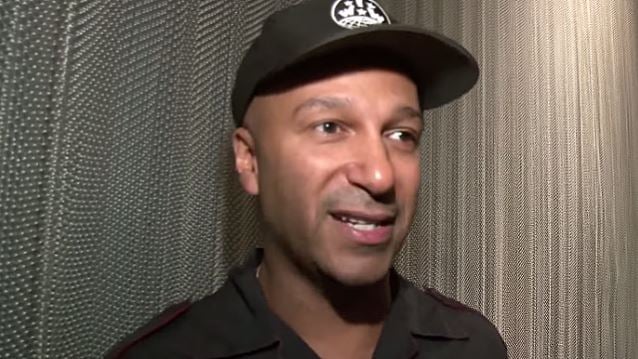 **UPDATE** Tom Morello has released a lengthy statement in which he offered his version of the events that transpired Friday night, including a response to accusations that he requested "special treatment" at The 5 Point Cafe. You can read his entire message at this location.

RAGE AGAINST THE MACHINE guitarist Tom Morello has slammed The 5 Point Cafe in Seattle for allegedly being "antiworker" and having a "super-rude staff" after reportedly being denied entry to the restaurant-bar over the weekend.

Following his performance Friday night (September 26) at the El Corazon as part of a benefit concert for 15 Now, the grassroots organization that successfully fought for a $15 minimum wage in Seattle, Morello and his entourage allegedly tried to get "a special room" at The 5 Point Cafe even though the place was already "at capacity" and there was "a line" of people waiting to get in. The restaurant's doorman apparently told Morello and his crew that he could not accommodate them, after which the guitarist took to his Twitter to blast the eatery, writing: "Five Point restaurant in Seattle is the WORST. Super rude & anti-worker. Shittiest doorman in the Northwest. Prick. Spread the word."

David Meinert, the owner of The 5 Point Cafe, has since posted the following response on the restarant's Facebook page:

"For the record, Tom Morello, The 5 Point is totally pro worker. We try to pay more than any other small restaurant, and on top of the higher pay, we offer health insurance, paid sick days, paid time off, retirement and profit share.

"Sorry if you had an issue with our staff, but typically our staff is awesome, and when they are not, it's usually a reflection of the customer. Act like a prick = get treated like a prick.

"I have to say, your attacking a small business without knowing anything about it, or addressing your problem with them directly before you go on a public rant, pretty much sucks. Just lost a ton of respect for you, and I've been a fan for years, both of your work in RAGE and your work for workers rights since.

"P.S.: Rock stars don't get special treatment at The 5 Point. We couldn't give less of a shit. Sorry.

"And P.S.S.: I'm the owner of The 5 Point and have worked to raise the minimum wage in Seattle and support the same nationally, worked to get paid sick days law in Seattle, and am supporting a city-sponsored retirement plan for employees of small businesses. I hope you do the same for your employees on the road...

"P.S.S.S.: [It] turns out [Tom] and his crew didn't get let in as the place was at capacity and there was a line. No one was being let in. According to our doorman, who I totally trust, Tom and his crew were all totally rude. Quote from the door guys: 'I knew who he was, we had no room, his whole party was being rude. He wanted a special room in the back. Clearly had no ideas what it is like inside. I've told bigger rock stars than him no.'"

**Thanks for story tip to Jeff Solberg, who also took the photo below.

Five Point restaurant in Seattle is the WORST. Super rude & anti-worker. Shittiest doorman in the Northwest. Prick. Spread the word.

Pancake Gate update: Luv&respect the workers.Glad to sit down w/owner next time in Sea, happy about his commitment to pay raise for workers 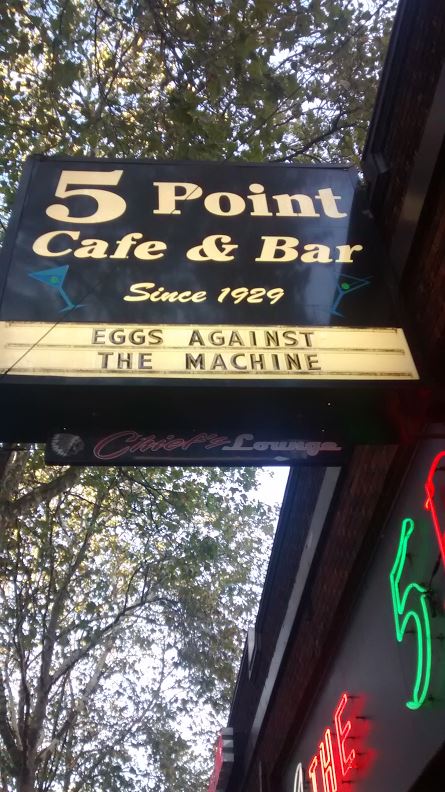 Post by The 5 Point Cafe.
Find more on Tom morello