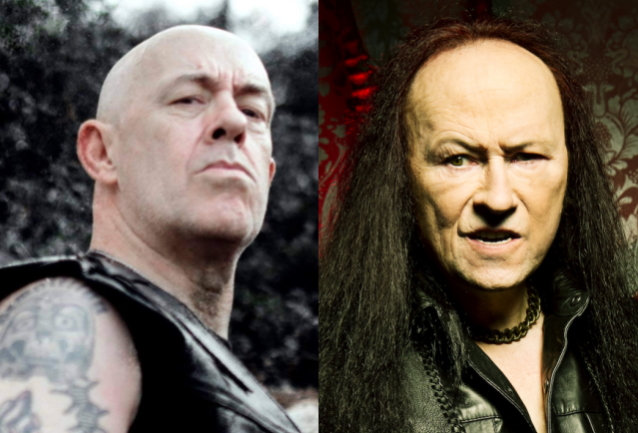 In a new interview with the "HRH Metal With Dan Chan" show, VENOM INC. bassist/vocalist Tony "Demolition Man" Dolan was asked if he and his bandmates have gotten any legal pushback from VENOM bassist/vocalist Conrad "Cronos" Lant over the fact that they are using the "VENOM" name. He responded (as transcribed by BLABBERMOUTH.NET): "The only [time] we had [an issue] was [when] we were due to go to South America, and the [promoter] was putting up the 'Black Metal' [artwork], the infamous [VENOM album] cover, so he was putting up the 'Black Metal' thing and using the VENOM [logo] from there and then they had an 'INC.' in there somewhere and you couldn't see it. And then Jeff [Dunn, original VENOM and current VENOM INC. guitarist] got a letter from the legal department at [VENOM's record label] Spinefarm on behalf of Conrad, just saying 'case and desist' to do that. So Jeff just wrote back and went, 'Okay. Show me any paperwork, any agreement anywhere where it says this is owned by one person anywhere.' And we never heard another word. 'Cause it isn't, of course. And I sent them a letter as well just to say we have not, do not use the imagery associated [with the Cronos-fronted VENOM]. We're not trying to convince everybody we're that band. We're distinguishing ourselves away from that — as being part of it, but distinguishing ourselves away, if anything. And if a promoter in another country decides to use whatever they want for a poster, you have to talk to them; you don't talk to us. So, for us, it was easy."

Dunn said in a 2015 interview with The Metal Voice that he didn't know how Cronos felt about VENOM INC.'s existence. "The fans know who he is, the fans know who we are," he explained at the time. "I don't wanna get into this whole political thing, but every band who's got a frontman who is iconic, [the fans] look at the frontman as 'that's the band.' Not true. [Cronos] was the last person to join VENOM — at my invitation. I met him at a girlfriend's friend's house. And we needed a rhythm guitarist — that's what we needed. We didn't need a vocalist; we had a vocalist. We needed a rhythm guitarist, because our rhythm guitarist had left. Essentially, we were, what? Two guitars, bass, drums and vocals — so we were a five-piece in the initial stages. So the rhythm guitarist left. I met this guy. I'd never met him before. He said he was a guitarist; he had long hair; he was into metal; he worked at Impulse Studios owned by David Wood, founder of] Neat Records. I had been there and walked out with my tail between my legs, because, at that point, me and the other guys who I had around in the band, we couldn't afford to do a demo. So it was, like, 'Hmm, that might be an inroad.' So he was invited to a rehearsal, he came in as a rhythm guitarist, and the bass player left, as bands do. By default, he took over bass, and then I wrote 'Live Like An Angel (Die Like A Devil)'. And the idea for that song was… I said to him, 'Can you sing?' And he was, like, 'I'll give it a go.' So the idea was that Clive Archer, our original singer, was gonna go off stage and do a costume change and come back on for 'Shizo'. A lot of these songs were written before he joined the band. And this is what people don't realize."

Regarding how Cronos came to use the VENOM name without either Dunn or original VENOM drummer Anthony "Abaddon" Bray, who was also in an early incarnation of VENOM INC., Jeff said: "In 2005, my mother was seriously ill and I lost her… I lost my mother at the end of that year. My mind wasn't on music, it wasn't on fucking a band's name or anything like that. And I had already made my exit. Those things went on, and I was, like, 'That's it.' And [Cronos] called me. It was something to do with a license coming back for an album, which we were then gonna pass to Sanctuary Records. And I was just, like, 'My mind isn't on this. It's gotta be on family. And I don't care. I really don't care what happens with this fucking album. Put it wherever the hell you want.' And it was during the course of that conversation [that] he said, 'Are you okay with me continuing VENOM?' [And I said], 'Yeah.' Is it a decision I regret? Yes. Because, looking back, if my head had been right, if my head had been screwed on at that point, I would have said, 'I think we should just bury it now.'"

Bray, who was also part of The Metal Voice interview, said that Lant never asked him for permission to use the VENOM name. "The name of the band, originally, was put together by the two of us," he explained. "So if he had legal standing, he's asked one person, [and] you have to ask the other person. 'Cause I would have said no. And that's why he didn't ask me, 'cause I would have said, 'No, I'm not okay with it.'"

Bray went on to say that Cronos did not have a possible legal case in wanting to stop VENOM INC. from using the VENOM name. "The only thing he's got, if we have a legal argument about it, is the recent longevity," he explained. "He's got [a period of several years] where he's been putting [stuff out and playing shows], so people know that's VENOM. And that's fair enough; we're not disputing that. None of us are disputing that. But we're saying is we have got what we've got and everybody knows what it's about and everybody understands it."

The Cronos-fronted version of VENOM is continuing to tour and make albums under the VENOM moniker. Joining Cronos in that group are Rage (a.k.a. Stuart Dixon) on guitar and Danté (a.k.a. Danny Needham) on drums.

VENOM INC. will release its sophomore album, "There's Only Black", on September 23 via Nuclear Blast Records. The LP marks the VENOM INC. recording debut of drummer Jeramie Kling, who joined the band in 2018.

Back in 2018, VENOM INC. recruited Kling to fill in for Bray on a European tour while Abaddon stayed home to spend time with his newborn daughter. VENOM INC. has since completed several tours with Kling without making any official announcements about Bray's possible return to the group.