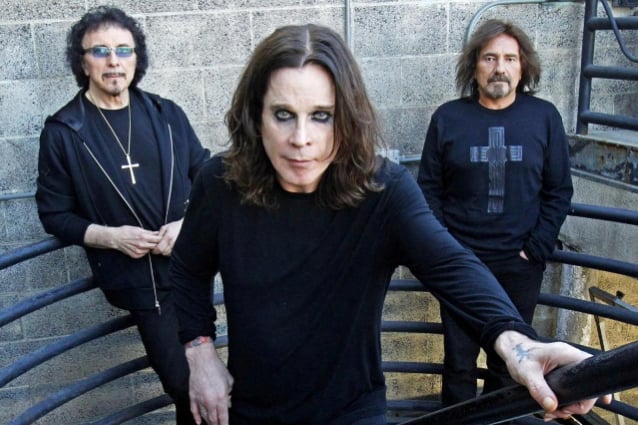 BLACK SABBATH guitarist Tony Iommi has revealed why Geezer Butler didn't perform at the closing ceremony of this year's Commonwealth Games in Birmingham.

On August 8, Iommi and BLACK SABBATH singer Ozzy Osbourne reunited in their original hometown of Birmingham, England to perform the band's classic song "Paranoid" — preceded by a truncated version of "Iron Man". They were joined by two musicians from the band's final tour, Adam Wakeman, who played bass and keyboards, and drummer Tommy Clufetos.

Speaking to BirminghamLive about Butler's absence from the event, Iommi said: "I don't think he wanted to come over as he hadn't been well with Covid. He'd been on holiday to Kenya and to Italy and had had an accident on a boat, cracking or breaking a rib about three weeks ago, so he was not quite in fine fettle to come over to play. It's a shame because we'd talked for a long time about the possibility of playing at the Commonwealth Games."

A few years ago, Ozzy said that he was open to the possibility of a SABBATH reunion at the Commonwealth Games, telling ITV that it "would be fantastic" to play at the the opening ceremony for the 2022 Games. "With BLACK SABBATH or on my own," he said at the time.

Sharon Osbourne spoke about her husband's appearance at the Games on Talk TV, telling the channel: "They asked us six months ago, and Ozzy couldn't possibly have done it till after his last operation. They saw Ozzy was at Comic-Con and they said, 'All right. Come on. Get him over.' And we were, like, 'All right.' And literally it was six days from their phone call to getting him there. It was just incredible."

Tony said about Ozzy's appearance at the event: "I never thought that Ozzy would be able to come and perform at the Commonwealth Games because of his operation. And then when he said he was coming over we were asked to keep it all a secret so that nobody would know."

Last year, Iommi was asked by The Mercury News about the possibility of another BLACK SABBATH tour at some point in the not-too-distant future. He laughed and replied: "I wouldn't think so. But it's a strange thing with SABBATH — how many times we thought we were with Ozzy, then we had [Ronnie James] Dio, then back to Ozzy, then Dio again, and then Ian Gillan and Tony Martin and Dio and back to Tony Martin. It's gone backwards and forwards at different stages. So, you just never know.

"I think it's highly unlikely that we'd get back onstage again," he said. "It certainly wouldn't be touring. We'd only do so many shows, if anything.

"I would like to play with the guys again. But I can't see that happening.

"The reason we stopped touring in the first place was basically my fault, because I had to be careful of my health," Iommi explained. "When you book a tour — and it's always an 18-month tour — it doesn't sound a lot when you talk about it at first. But when you get out there, and you are touring, it's bloody hard work. And it wasn't particularly good for my health, because of the blood cancer. So, I said, 'Look, you know, this should the last tour, I think.' But I really do miss it. I really miss playing onstage. I miss seeing the audience."