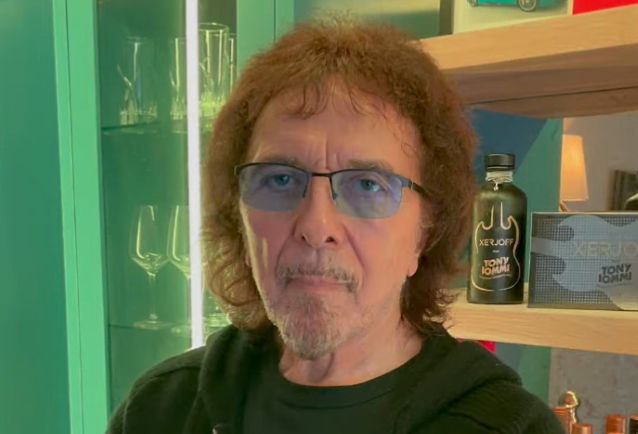 Legendary BLACK SABBATH guitarist Tony Iommi has shared a year-end video message in which he outlined some of the projects that kept him busy during the last 12 months. The 73-year-old musician, who was diagnosed with early-stage lymphoma a decade ago, stated in the three-minute clip (as transcribed by BLABBERMOUTH.NET): "Hello. Well, it's that time of year again. Another year — 2022. Can you believe it? Time just flies by so quick nowadays. It's been a real busy year for me, though. I've been doing a lot for the SABBATH box sets that we've had the last year, which has been interesting. I've been doing a lot of interviews, as the rest of the band have done interviews as well. So it's been good, and they've been received really well.

"A couple of interesting things have happened to me in the last year," he continued. "One being they named a fossil after me — a 480-million-year fossil, which they've called Iommi. That was brilliant. I never thought that would happen. And the next thing that happened which I, again, would never have believed is I've got my own perfume out. I was approached by Xerjoff, the luxury Italian perfume company, if I'd do my own perfume. And God, I said, 'Yeah.' I mean, that's really great for me, 'cause I've always been interested, for many, many years, in different colognes and aftershaves and whatever else. And that seemed a great opportunity to be able to get involved in something, and I have been involved with Sergio Momo, the CEO of Xerjoff, from day one. For the last two years, we've been working on this, and it's coming out really good. I also wrote a track called 'Scent Of Dark'. I was working with Mike Exeter, the engineer/producer, at my house, and we came up with this track. And I played it to Sergio, he liked it, and we've used it as the track to support the perfume. And it came out really well — I really enjoyed it, and the response has been fantastic on it. I'm continue in that vein of writing stuff like that. It was a great experience for me. And we had strings on it. It was really good. Sergio also played some guitar on it. So that worked out well. That was interesting and a good project. And we did a video with that, which was good fun, to support it. And my wife played the ghost at the end of the video, and the beginning of the video, so have a look.

"Another thing I did [is] I worked with Ozzy [Osbourne, SABBATH singer] on a track for his [upcoming solo] album," Tony added. "I wrote this track and he's done some great vocals on it. I was really pleased with what he's done; he's singing really well. So that was another project we did.

"I would also like to thank my longtime friend Ralph Baker — my manager and friend for 30-odd years. It's amazing, really. He's done a great job and he doesn't get the credit, or he hasn't got the credit that he deserves. He's been behind the scenes working hard, and he's been there night and day for me. It's been great. And thanks, Ralph.

"And finally, I'd like to thank all the fans out there, you people. You've been great and stuck by me, and you've been brilliant. And I'd like to wish you all the very best for 2022. Have a great year. Thank you."

SABBATH's final tour, "The End", concluded in February 2017 in Birmingham, closing out the quartet's groundbreaking 49-year career. "The End was SABBATH's last tour because Iommi can no longer travel for extended amounts of time.

"13" was the first album in 35 years to feature Iommi, Osbourne and bassist Geezer Butler all playing together.