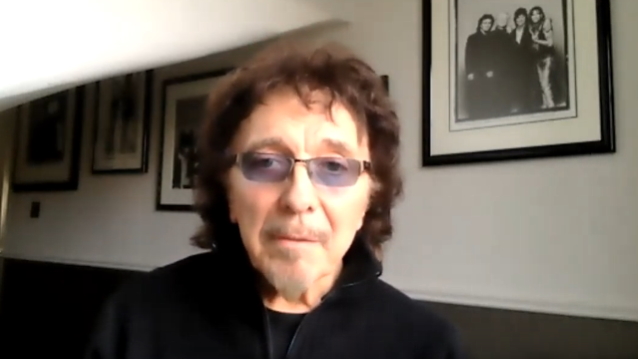 TONY IOMMI Looks Back On BLACK SABBATH As Band's 'Heavy Metal' Bench Is Reinstalled In Birmingham: 'I Wouldn't Change Anything'

A new video containing an interview with BLACK SABBATH guitar legend Tony Iommi has been made to commemorate the reinstallation of the band's "heavy metal" bench on Broad Street in Birmingham, England.

The mini documentary is presented by Christian Martin, the former Argentinian rugby player who is himself a huge BLACK SABBATH fan, and features rare footage of the band performing in its early days.

The video was commissioned and released by Westside BID to commemorate the rededication of the bench which first appeared in 2018 but had been temporarily removed during the Midland Metro tram extension works.

Martin, who was in Birmingham last week covering the COVID-19 lockdown for A24, the Argentinian-based cable news channel, agreed to front the video as a "labor of love" because of his enthusiasm for BLACK SABBATH.

During the 20-minute video, Martin sits on the bench — which features steel cut-outs of all four original members of the band — and uses a live Zoom link to interview Iommi from his home in the Cotswolds.

Iommi, BLACK SABBATH's lead guitarist who was born in Aston, talks about his Broad Street links and how apt it is for the bench to be there. He said: "I used to be on Broad Street all the time as a youngster at the Rum Runner nightclub, so this brings back a lot of memories to me."

He recalls the band's early days: "We had a tough road as no one had heard our kind of music and we could only play in small Blues clubs across the city. But we loved and believed in what we did."

Iommi spent a short time with the JETHRO TULL band and said this is where he learned the discipline it took to be successful. He said: "It was so organized, and when I went back to the band, I realized we had to rehearse and take it seriously. I was the only one who could drive, so I used to pick everyone up at 9 a.m., the same schedule every day, and we worked hard at it.

"It was never a chore, but it was tough in the early days when we had no money and on tour used to sleep together in one room. Then, as the money started coming in, we could stop in hotels when going around the world and it was amazing — I wouldn't change anything."

Iommi, who said he still speaks to lead singer Ozzy Osbourne by text most days, said he was "really proud" of the "heavy metal" bench. He added: "We've helped put Birmingham on the map. We're — if you like — the Birmingham BEATLES, and it's good for Birmingham to have these attractions."

The video also features an interview with Cllr Waseem Zaffar, Birmingham City Council's cabinet member for Transport and Environment, who originally allowed the bench to be placed on Broad Street.

At the end, Mike Olley, the general manager of Westside BID, cuts a huge black ribbon to rededicate the bench, using left-handed scissors specially made for the event by William Whiteley and Sons Of Sheffield. The scissors — engraved with Tony Iommi's name as he is well-known as a left-hander — were then presented to Martin to thank him for presenting the video.

Olley said: "The original unveiling of BLACK SABBATH's 'heavy metal' bench was a huge event back in 2018 and we wanted to celebrate its return now the Metro works have moved along. We're grateful to Christian Martin for helping us make this video and we hope SABBATH fans in Birmingham and across the world enjoy it."

The video was produced by Jim Simpson, the original manager of BLACK SABBATH, and all archive film and pictures used in it are his copyright which he has waived. The video was filmed by Greg Gdowski and Margaret Maslanka of 57 Studio, directed by Mike Olley and technical facilities were provided by Al Dawkins of Cannock Sound.