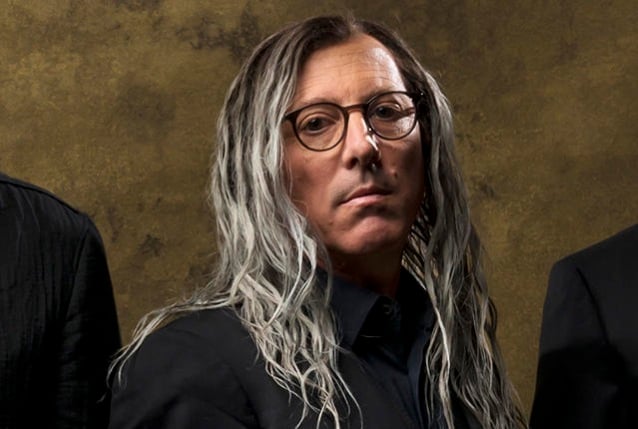 TOOL frontman Maynard James Keenan has denied accusations that he raped a 17-year-old woman in 2000, calling the allegation a "despicable false claim."

"Many thanks to those of you who saw right through this despicable false claim that only does damage to the #MeToo movement," Keenan wrote on Twitter. "And shame on those of you who perpetuate this destructive clickbait. As for my delayed but un-required response, I had my phone off. You should try it."

According to The Pulse Of Radio, Maynard was accused of rape by someone posting anonymously on Twitter. Writing under the handle @IWas17HeWas36, the person alleged that Keenan raped her at a NINE INCH NAILS/A PERFECT CIRCLE concert in 2000. She wrote in part: "We were in the front row and my boyfriend had his arms around me... Maynard saw me and threw a water bottle in my direction. The guy next to me caught it. My boyfriend and I laughed and thought that was cool. Minutes later, a heavy-set, blonde, white woman came out to meet us. She looked at me and asked, 'Do you want to meet the band?'"

The alleged victim was not allowed to bring her boyfriend back with her, but was led backstage by the woman, who she said she never saw again. When she got there, she recalled: "Maynard was sitting on a picnic table and was staring at me. NIN hadn't gone on yet so I thought I had plenty of time to get an autograph and get back to the show and my boyfriend... But Maynard kept chatting. He asked me how old I was. I said, 'I'm 17.' Then he said, 'I can't talk to you here, let's go watch a movie' and he pulled me away from everyone and onto a tour bus."

The Twitter user then describes in graphic language how Keenan allegedly raped her on the bus, adding: "There was no consent made. I was not high. I was clean. He did not seduce me, he forced me, quickly taking advantage of my paralyzed state. It took me years to process his actions... I'm sure to some this doesn't sound like rape. I'm telling this story because in the year 2000 the conversation about consent was non-existent, at least not at my high school."

The person concluded: "It has been 18 years and I'm still working through the trauma of that assault. #MeToo and #TimesUp has been an eye opener. I hope that everyone gets a chance to heal. I hope I can heal... I kept it in for years because I knew I wasn't going to be believed by he legion of dedicated fans." She added: "Later on, I heard from a male friend that he did this in every city, at every show. He preferred underage girls (or as close to underage as he could get)."

The accusations have been widely discussed on Reddit since they first surfaced over the weekend, with several users saying that they had similar experiences in which women were invited backstage to meet Keenan — but were not allowed to bring boyfriends with them.

Another Reddit user, however, suggested that the accuser's story was not credible, saying: "It's not true... The security staff checks IDs. If you are not of age, you do not get to go backstage. 17, though 'legal' in some states, does not make the cut. Full stop." This user went into more detail about the backstage situation, claiming that he had two female friends who both slept with Keenan and had no issues.

It's important to note that the claims, for the moment, remain anonymous and uncorroborated. Keenan — who's now married with children — is touring Europe with A PERFECT CIRCLE.

Many thanks to those of you who saw right through this despicable false claim that only does damage to the #metoo movement. And shame on those of you who perpetuate this destructive clickbait. As for my delayed but un-required response, I had my phone off. You should try it.