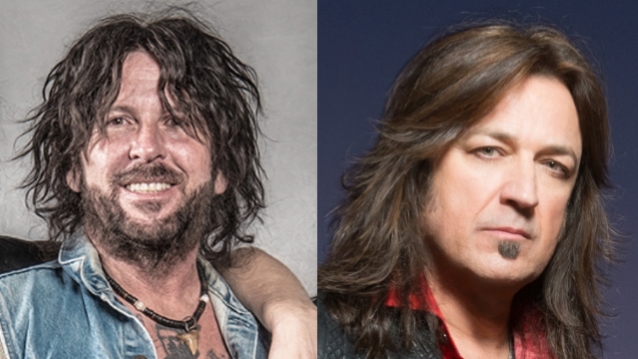 During an appearance earlier today (Tuesday, May 5) on SiriusXM's "Trunk Nation", Guns stated about the musical direction of SUNBOMB: "I love black metal. I love black metal more than I love a lot of other things. Because black metal has a certain element of Randy Rhoads in it that people might not really identify that, but I always have. There's something about the double picking and the way the chords are structured and the weight of the music.

When host Eddie Trunk pointed out to Guns that Sweet — being the frontman of the most successful openly Christian hard rock band of all time — is likely not much of a black metal fan, Tracii corrected him: "I think he is." The guitarist went on to say that he and Michael are able to work together without butting heads about religion or politics. "You have the biggest non-believer and the biggest believer," he said. "But that's the kind of guys we are — I'm able to separate the beliefs from the music; they're not one and the same. And Michael and I have talked about it. I'm an open-minded person and I respect [other people's perspectives]."

When Tracii first broke the news of SUNBOMB's existence in a March 2019 tweet, he described the project's debut LP as "the metal record I would have made when I was 17 years old."

A short time later, Sweet responded to Tracii's tweet, writing: "I'm excited to be a part of it Tracii. Who would have thought when we were young that we'd be working together. Thank you for trusting me with the vocal duties SUNBOMB is gonna be Bomb."