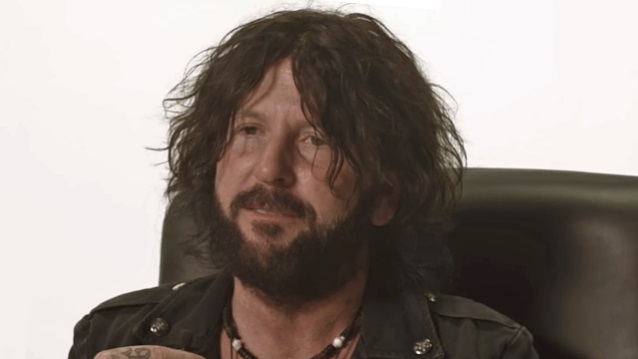 Tracii Guns says that "it's wonderful" to see a Ronnie James Dio hologram touring the world.

The "Dio Returns: The World Tour" production uses audio of Ronnie's live performances from throughout his career, with the DIO band playing live, consisting of Craig Goldy on guitar, Simon Wright on drums and Scott Warren on keyboards, along with Bjorn Englen on bass. Also appearing with them are former JUDAS PRIEST singer Tim "Ripper" Owens and LYNCH MOB's Oni Logan.

Asked by Bladerunner Radio for his opinion on the Dio hologram, the L.A. GUNS guitarist said (hear audio below): "I think it's wonderful. There's a couple of naysayers — there always is, 'cause people have nothing better to do in their life than say 'nay' — but if you're a Ronnie James Dio fan and you wanna go see that band and you wanna hear Ripper — Ripper's a monster — it's an amazing thing. And beyond that, a big percentage of the profit goes to the Ronnie James Dio cancer foundation. So there's not one negative thing attached to that."

He added: "The hologram thing, yeah, it's creepy and it's weird, but it's legit though."

Tracii went on to say that he would be thrilled to see some of his favorite artists perform in holographic form. "Here's a great example: if [LED ZEPPELIN members Robert] Plant and [Jimmy] Page and John Paul Jones wanted to do that with [John] Bonham, I would pay anything to do see that. I would," he said. "I would pay anything to see a hologram of John Bonham live. That's the way I can justify it. Like, who am I a huge, huge, crazy fan of? I would be so excited, and it would be unbelievable. And I'm a huge fan of Ronnie James Dio, but there are people that are much bigger fans than I am. So I know how they feel. 'I can go see this? My God! It's incredible.'"

Tracii and singer Phil Lewis reunited in 2016 under the L.A. GUNS banner and released arguably the most critically praised album of their catalog, "The Missing Peace".

L.A. GUNS will release a new CD, DVD and Blu-ray, "Made In Milan", on March 23 via Frontiers Music Srl.