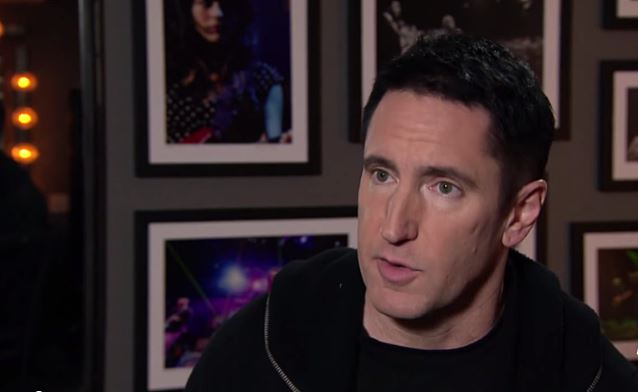 According to The Pulse Of Radio, NINE INCH NAILS mainman Trent Reznor spoke this week with Rolling Stone about his involvement with Apple Music, the new streaming service launched earlier this week by the tech giant. To help celebrate the launch of the service, for which Reznor is chief creative director, he made available previously unreleased instrumental versions of the NINE INCH NAILS albums "The Fragile" and "With Teeth".

Reznor admitted that his work on Apple Music took him away from writing new music, but revealed that he has been "messing around with some things," adding, "It's not a record I'm trying to finish in a month. It's more just feeling around in the dark and seeing what sounds interesting. It's nice to do that every few years to try and reinvent and discover and try to learn about yourself and what feels exciting to you as an artist."

Resigned to the fact that less and less people are buying CDs, Reznor said he got involved with Apple Music because "my own travels led me to think that subscription [streaming], if it was done right, really would be the best experience for music fans." Reznor added that his own experience with existing streaming services "left me feeling a little lacking," adding, "I want that feeling of walking into an independent record shop, if there are still any that exist… and being delighted by the choices and the way music is presented to you with love and care. It's exciting." Reznor insisted that Apple Music is different from other streaming services because "every song has been chosen by somebody… It makes music feel more personal and it raises it up a notch into something what it deserves, rather than a big-box-retailer feel."