"We're really proud to be this year's ambassadors," Moore said in a video message.

"When I got interested in music, my buddies and I in the neighborhood, we had a pilgrimage pretty much every weekend. On Saturday morning, we'd all get to the bus station and get ourselves downtown. And here in Toronto, we had Sam The Record Man on Yonge Street, which was the record store that was the 'be all, end all' of vinyl… That's what got me started playing drums," he explained.

"So make your way over to your local record store and parse through those beautiful vinyl records, find some music that you wanna fall in love with, and turn it up loud."

The TRIUMPH box set, due out June 12 via Round Hill Records, will include the following:

"We're extremely proud of 'Allied Forces'," Levine said in a press release. "It was the record that started the global rocket ride for us. And we're also excited to share with our fans some really great moments from our archives with this box set."

TRIUMPH reformed its classic lineup of Moore, Emmett and Levine for an invite-only event in November 2019 at Moore's MetalWorks studio in Mississauga (a suburb of Toronto),Ontario, Canada. The reunion — which was taped for the forthcoming documentary "Triumph: Lay It On The Line" — stoked discussion whether the band would join the ranks of other veteran rockers for a reunion tour.

In an interview with Canada's The Metal Voice, Moore was asked about the possibility of new music from TRIUMPH in the not-too-distant future. He responded: "It's hard to say. There's nothing stopping us. Obviously, MetalWorks is still there.

"We played three songs in the film, and they're recorded," he continued. "So, actually, that live performance is part of the documentary. And Mike and Rik and I have kicked around the idea of going back in the studio. Mike and I recorded a little bit on Rik's last album.

"We're all quite busy, so finding the time to do it, and the musical inspiration and so on, it could happen. We'll see."

Emmett has said in various interviews over the years that he would welcome the chance to play TRIUMPH songs with Moore and Levine again but that those two have been reluctant to commit. "If the carrot was big enough and golden enough, I think it would make Mike and Gil, but especially Gil, do it," Emmett told the QMI Agency back in 2012.

Moore, Levine, and Emmett formed TRIUMPH in 1975, and their blend of heavy riff-rockers with progressive odysseys, peppered with thoughtful, inspiring lyrics and virtuosic guitar playing quickly made them a household name in Canada. Anthems like "Lay It On The Line", "Magic Power" and "Fight The Good Fight" broke them in the USA, and they amassed a legion of fiercely passionate fans. But, as a band that suddenly split at the zenith of their popularity, TRIUMPH missed out on an opportunity to say thank you to those loyal and devoted fans, a base that is still active today, more than three decades later. 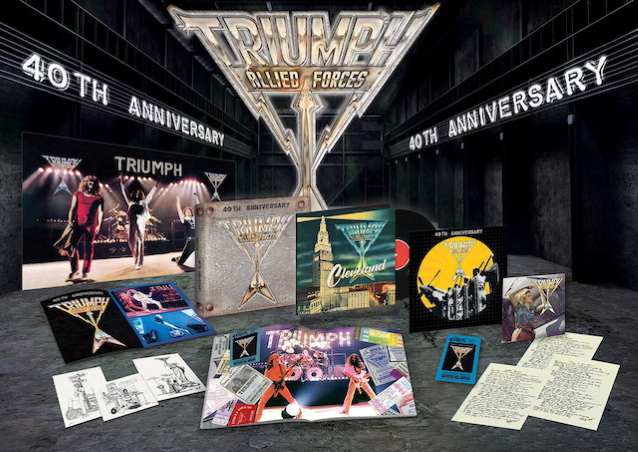