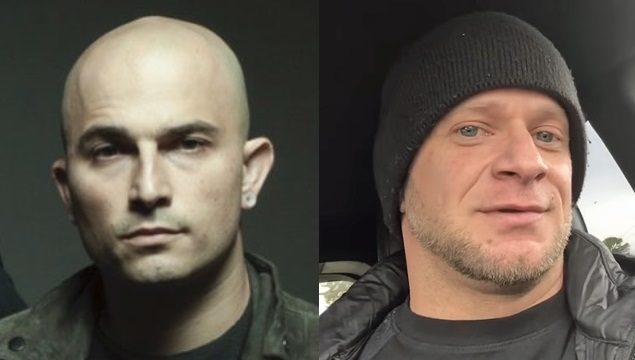 TRIVIUM Bassist On His Twitter Feud With ALL THAT REMAINS Frontman: 'It's Something I Felt That Needed To Be Said'

TRIVIUM's Paolo Gregoletto has commented on his Twitter fight with ALL THAT REMAINS's Phil Labonte, explaining that it gave him a chance to say "something that needed to be said and said by someone in a band."

The war of words between the two musicians started after Labonte appeared on Internet provocateur Milo Yiannopoulos's InfoWars show to discuss the contentious issue of U.S. gun control in the wake of last month's mass shooting in Florida.

After video of Labonte's appearance on Milo's program was posted on YouTube, Paolo took to Twitter to call out the singer for his comments, at one pointing referring to Labonte as "a discount Jesse Leach." Labonte fired back by accusing Paolo of "riding coattails" and calling him "the third most important guy in a four-man band."

In a brand new interview with Metal Wani, Gregoletto was asked why he thinks Labonte went out of his way to respond to the bassist's comments, going so far as to make a YouTube video about it. "Probably 'cause I'm in a band that is prominent and a lot of other band guys don't really say much," Paolo said (hear audio below).

"I generally don't dive into stuff like that, and I really don't care about the content of any of the [Phil's] interview [with Milo Yiannopoulos] or what was said — it's irrelevant.

"It's something I felt that needed to be said and said by someone in a band, because it's usually just maybe fans saying something back, and it's kind of easy to bat that stuff down.

"For us, this genre is all about bringing up new bands, bringing up good stuff, and I feel like that sort of shit really overshadows what matters, which is good music, good players, good vocalists, people that deserve a chance to be heard," he continued. "And we're about empowering that, and the attention-grabbing stuff takes away from all of that. And when you don't do your actual job good, and you're using it as an attention-seeking thing, I think it's fucking stupid. And if that's what you wanna get out of this, fine, but I wanna drag it back to new bands, I wanna drag it back to better bands, the bands that never get any attention, because it's always sucked into the bullshit of people like that. The bands that we're bringing out, I want people to know those bands, because they give a shit — they're busting their ass. And they deserve the attention — not the people that don't give a shit, don't put any effort into their craft or music, have given up on it or given up on the genre but wanna use it when it's convenient to them."

Paolo added: "That was really all it was about it. It was sort of me being, like, 'I don't really care. I think I'm gonna break the seal here, which is stepping back down from the fray, or into the fray.' I don't like to be a drama, attention seeker, but if that's what it's gonna take to maybe force people to kind of think about other things — like I said, new bands, bands that try hard — then it is what it is. But at the end of the day, what matters is our music, our touring, focusing on that. That's why it didn't go anywhere else past those two days [of the Twitter back-and-forth]. It is what it is. Everyone has their views on how that was or what it achieved. But it is what it is. And it's nice to just be able to say what you think and not always pretend that everything is great and stay silent when you don't really need to be or want to be."

Last month, Labonte, a staunch gun-rights advocate, posted a video message in which he offered his thoughts on the gun debate, expressing his belief that a ban on semi-automatic rifles would not reduce mass shootings and insisting that this nationwide crisis of firearm injuries and deaths would not be solved by a formal change to the Second Amendment.