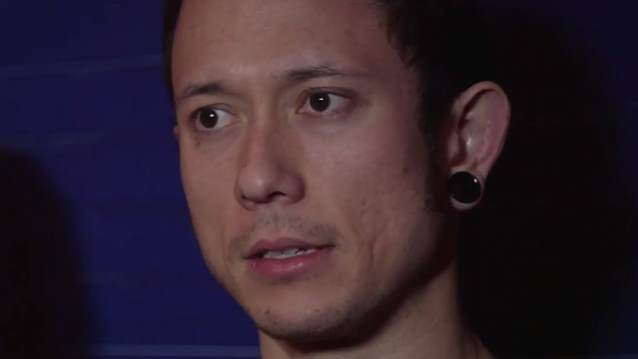 "My family and friends worldwide and namely in the USA, I always call for each of you to give their all — as you always do — and in turn we in TRIVIUM return the favor with everything we've got.

"As it turns out, I quite literally gave everything I could have given just yesterday at Rock On The Range in Columbus, Ohio.

"I am reminded once again that I am but a mere mortal (not saying that I ever think or believe otherwise, only that at times, on stage, one does feel pretty powerful); my voice blew out by the end of yesterday's set. My doctor's orders are that I need two weeks of rest before resume singing, and as a result, TRIVIUM will cancel our remaining shows this week.

"I have canceled one show previously due to vocal issues, and this time even with the numerous precautions I take every single day on the road to ensure the greatest performance for those who keep me alive, my voice still gave out.

"My apologies to all our friends who were hoping to see us in Birmingham, Baton Rouge, Memphis, and Pryor. My condolences to the TRIVIUM road crew, local promoters and most importantly, my brothers in arms: Paolo, Corey and Mat.

"I'll do everything I can do make my vocals back to 100% before Europe, and know that we will come back and make up shows in: Salt Lake City, Birmingham, Baton Rouge, Memphis, and Pryor. I don't know when, but you are not forgotten."

TRIVIUM earlier in the month parted ways with drummer Nick Augusto due to personal differences. TRIVIUM bassist Paolo Gregoletto stated about the split: "We all agreed that what started out great 'off stage' in the beginning over time began to fray. It became obvious that things were not going to work out in the long run.

"We did not want to reach the point where the differences between us became apparent on stage.

"Being in a band is privilege afforded to us by all of you, and as much as we owe you guys the best show we can possibly give you, we also realize that being out here has to be enjoyable enough for us to continue to do so."

Stepping in for Augusto on TRIVIUM's current dates is the band's drum tech, Mat Madiro.